We made the ambient light much brighter (also during the night, but blueish) and did some work on the sun and moon’ lights to accommodate better to the scene, along with some tweaks on the terrain’ reflection.

We also made the camera hover much closer to the player, in order to both create a better connection between the player and the characters, and to make exploration more interesting (less world visible at a time)

Implemented a first version of the fatigue system, including modifiers. Environment changes will affect the rate at which your expedition gets tired. The hunger system was also simplified, made a bit more abstract and easier to understand and control.

You can now create a camp for your Expedition to recover the fatigue. It will take some time to create and then you can either rest on it or transform it into a town which you can name. The definitive town creation will likely be a bit different tho. You also now you see a title with the day of the Expedition every new day, which now last 3 minutes. We did further tests with low poly trees for forests, but definitively the texture alone looks better for now. Also switched the models used for Soldiers and Archers, for lighter equipped versions.

Created a new town, “Nueva Esperanza” located on an island near the mainland. Re-imagined the setting (still in progress) but basically, this island is a safe place where a city was established years ago but the mainland remains unexplored and savage, so your mission is to fix that.

Redesigned the town dialog based on a new model with actions and buildings with people inside, also implemented a new “interaction” dialog, to talk with people in towns and access the stores.

This week we have progress in Expedition, OpenArthurianX6 and Age of Golf

We have progress in doors and keys for OpenArthurianX6 #screenshotsaturday #ultima #indiedev pic.twitter.com/2uKo8739oT

It’s been over a month since I last posted about Expedition; while we had to switch to client work for a little bit, that doesn’t mean the dev has stalled.

As usual, you can discuss this update or the game in general at the community here.

Some of the things that have happened:

We are currently working on making the game look better, especially on land, as well as being able to produce a build displaying a full gameplay cycle. We already went over a couple visual improvement cycles, trying different options especially for the vegetation. Since the game is meant to be portraying a “high scale” map, it was tricky. We tried using tree models but the varying zoom levels made it hard to settle on a polygon count and we hit performance issues when displaying big populated forests.

Another thing we tried was using TextureForest, which implements a technique that works pretty well for flight simulators, but for our case in which the camera zooms in pretty close, it didn’t look as good as we needed.

What we are using now are flat textures for forests (obtained from the assets used by TextureForest). We are going to experiment a bit further by including normal maps and maybe very low poly models for the forests, but for now, I’m content on how it looks. It needs more variety, of course, but I like the style and I believe it successfully portraits the scale of the game, if maybe in a bit of a symbolic way.

Of course, in order for this to look half-decent, it should be rendered on a good heightmap. After trying to create the map manually it became evident that would be a lot of work and results were not very good so we had to find a way to generate the terrain with procedural tools. We experimented with the Gaia, but I found it cumbersome to use, and too intrusive in the project structure. Granted, I could have investigated more into it, but I didn’t feel it was going to be very helpful since it seemed aimed at a higher level of detail, first or third person scenes.

In the end, I decided to use FractScape, a simple, effective, and pretty old tool that does the job very well. Basically, you start with a height map of the general shape you want, then it runs some displacement algorithms on it and applies textures to the heightmap based on the height, blending them nicely. It has a ton of other options to tweak the result but that’s the core of it. After you are done with it you can export the RAW heightmap as well as a TIFF splat map that can be loaded into Unity using a simple script to paint the terrains. 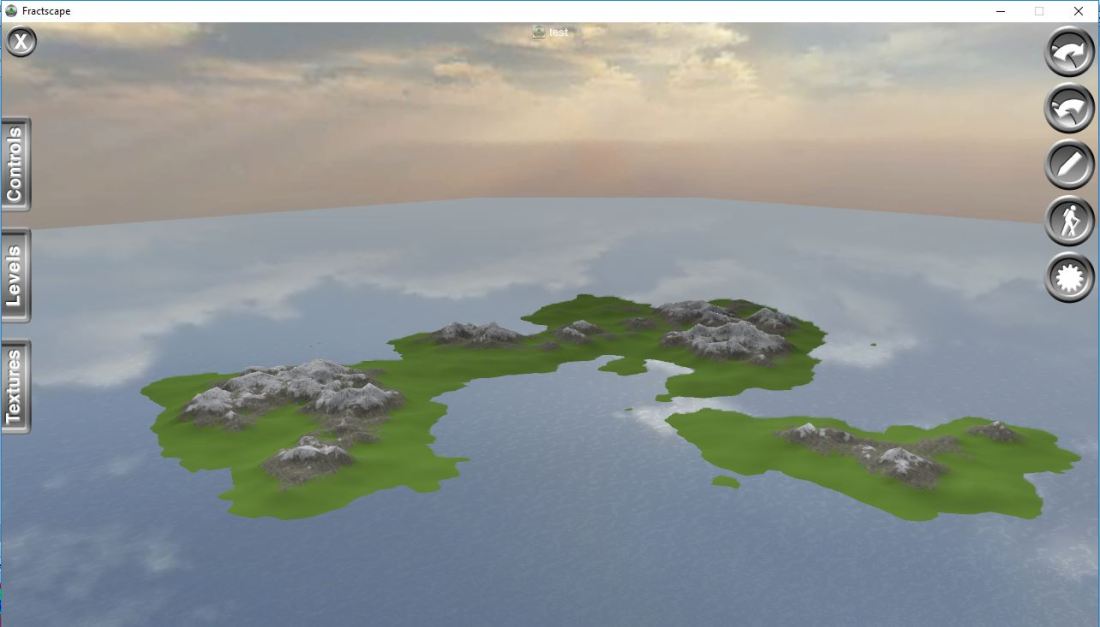 Another big thing that was added since the last update was the first iteration of the combat mode. Right now your party can be ambushed, and if that happens you can command your expedition members to either attack or flee. There are melee and ranged units, and the combat is similar in some aspects to an RTS.

We are still working on the design of the second iteration of it where you can give more detailed commands to your units. But my idea, following the original version of Expedition, is having combat be almost automatically driven without any micromanagement on the player’s part. The role of the player is to keep the expedition members well fed, well equipped, rested and motivated.

There were also big changes on the clouds, for now, we have discarded the plugin we were using, and we are instead showing a very simple mist effect that looks much, much better. From the gameplay perspective, we have completely disabled the effects that the clouds had on the player, removing both the storm mode and some effects we added afterward when transversing them. The reason is I could find a good justification to keep them as an interesting gameplay element. 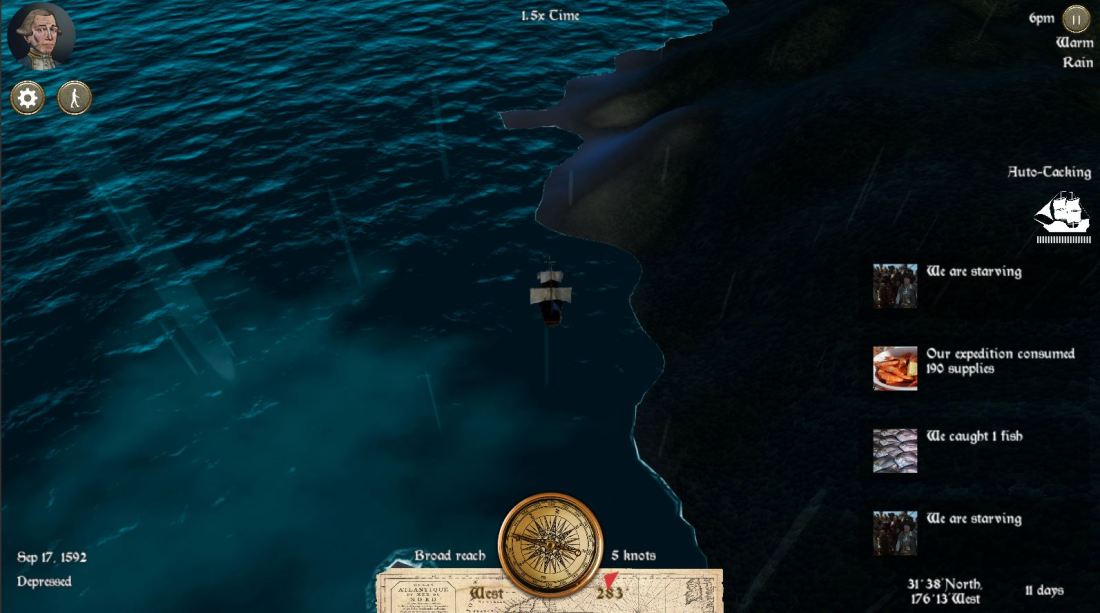 Sailing also had another big change, and now the sailing speed remains constant from the player’s perspective, regardless of the difference between wind direction and ship’s heading. However, time will pass quicker if you are sailing slowly, and this will affect your Expedition’s supplies. This makes sailing less tedious while still keeping the component of optimizing your voyages using prevailing winds currents.

We replaced the painting in the Title screen with a 3D scene. This is still early progress but I believe it works much better.

One of the things about the game that I haven’t detailed a lot is the procedural stories aspect, the idea being that the game will be able to create histories around your characters and unveil them as you progress in your adventure. We included some initial components for that, but it’s still underdeveloped.

The foundations for this, or at least some inspiration, come from my latest 7DRL (Heroes of Noresskia), in which I toyed with the idea of an automated DM.

And that’s it for now! Hopefully we’ll have a gameplay video up soon, showing how this all works together 🙂

We have been working on the tech demo for about 15 weeks now. Discuss this update or the game in general at the community here.

This week we had to stop development in order to focus on client projects temporarily. However, we managed to do some tweaks in the store flow, as well as some enhancements on the appearance of storm clouds (still not definitive, need to make them look crispier). 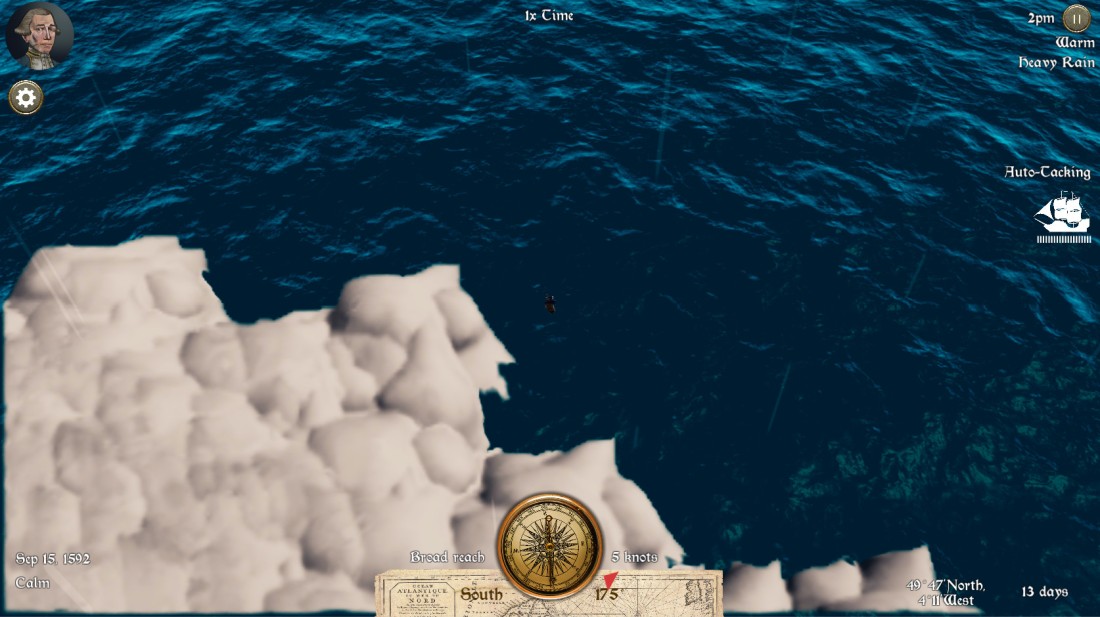 We also advanced in the implementation of in-game triggers for the scenarios, this one happens when you reach Rio with James Cook’s expedition for the first time.

Besides this dev work, I’ve been working in some high-level designs, looking forward to pitching the game to companies interested in funding its development. We will see how this works.

We have been working on the tech demo for about 14 weeks now. Discuss this update or the game in general at the community here.

Implemented a first iteration of volumetric clouds replacing the billboard we were using initially, still gotta work a bit on them to have better cloud models and play around a bit with the settings of the plugin we are using (as well as work some display bugs it has). 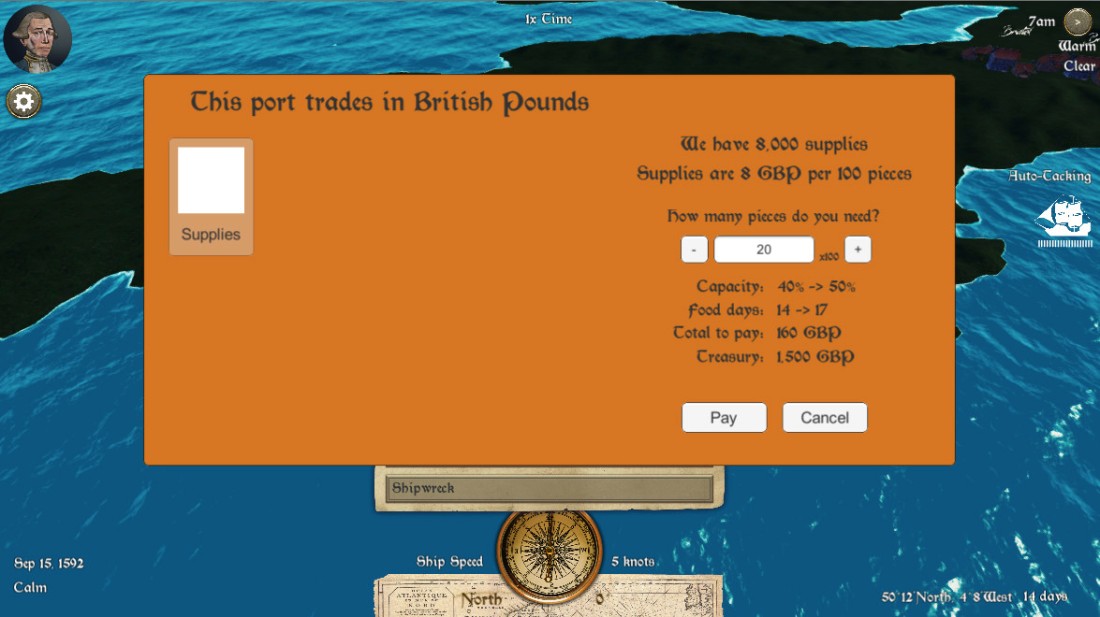 We implemented a first version on the “Buy Goods” flow, simplified to a single type of abstract “supplies”, and still without any UI art. But it allows for a complete mechanic of having to restock your ship to survive.

Future iterations will have different ports use different currencies, requiring you to exchanges your valuables. This will also work as a “bartering” mode for cultures that don’t have a currency, so things will be assigned a temporal “Value” that works as a currency.

As we continued tweaking and fixing minor issues in the world simulation, we looked forward to creating the elements required to have a first complete gameplay loop. We tied the player’s starting position to a city defined in the campaign, made it so that this city’s window opens when you start, and we are now working on the quest system.

We get closer to our goal for the tech demo, once the Quest system is in place we will focus on polishing the UI, adding the “freeform” expedition mode, and doing a basic skinning over the world map adding forest, terrains for deserts and montains and tundras.

We have been working on the tech demo for about 13 weeks now. Discuss this update or the game in general at the community here. I will be posting weekly updates from now on (instead of bi-weekly).

Finishing work from the previous week, we did some changes on the Storm mode, changing the values for the scale of the waves, restricting time compression and fixing the camera focus. We also smoothed out the wind direction changes for them to look less abrupt especially on this scene. 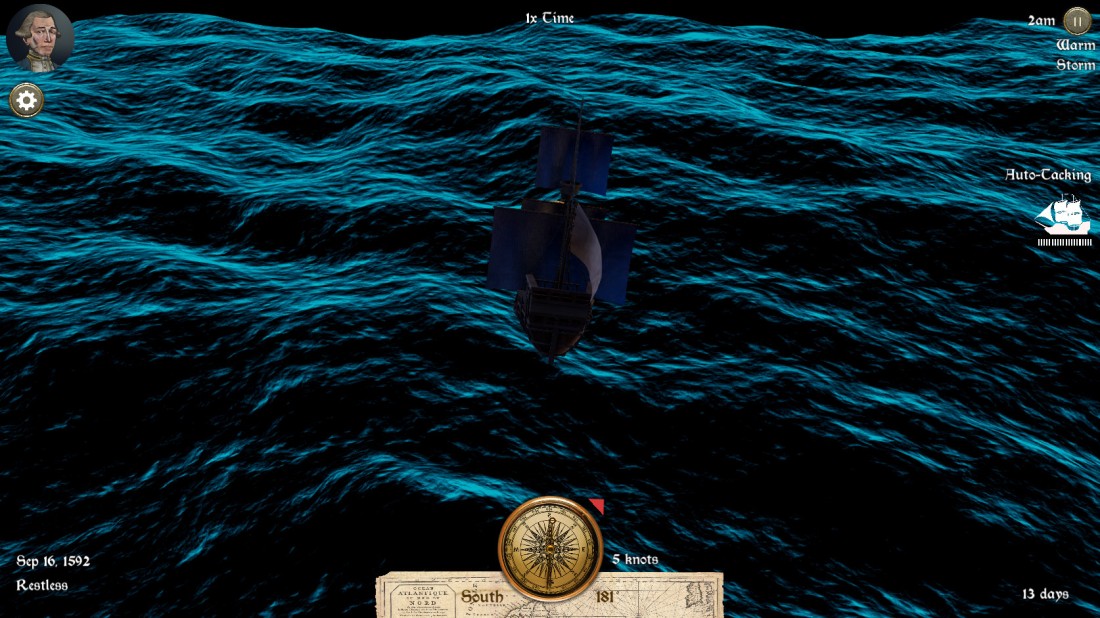 Next up, we started adding some subsystems to make this a playable game. We added a general “notifications” system to show events to the player and implemented a test “Fish Caught” event which increases the supplies a little bit.

We made expedition members go hungry and consume food from the expedition supplies, based on the settings for ration size and the number of daily rations. This included calculating and displaying the remaining days of supplies in the UI.

We also added a system to affect the morale of the expedition members on an individual basis and integrated this with the Hunger system (so the get increasingly depressed when hungry). as well as other things such as being away from land for too long, and outcomes from the “Man overboard” event. We are also displaying the average morale value on the UI.

In order to implement these, we did a refactor on the events system so that the passing of the time of day is handled by a single component, which then defers further checks and effects into the specific components (such as the Weather controller or the Expedition object)

Finally, we integrated a batch of art into the cutscene for Captain Cook’s campaign.

We also had some discussion about future gameplay modes, including additional campaigns that are not strictly historical but rather include fantasy elements and plots, battling with monsters, dialogs with NPCs, all this keeping the focus on expedition management and navigation.

I also created a simple landing page for the game, and linked it from Slashware’s homepage.