November 11 and 12 were the dates selected by the organizers for the second roguelike celebration in San Francisco, California. This time it was two full days, with a single track for talks, and it was awesome. You can check the videos for all the talk at the Internet archive. Following is a summary of the events that took place during the celebration.

Last year, the venue for the event was provided by EventBrite; this year it was GitHub who provided a full space as well as much needed food and refreshments. They also promoted their Github Game Off jam (in which I participated with Rogue Program)

The talks have been archived at the Internet Archive (you can stream them from there) in case you want to dig into any of them. Following is just a short summary of the key points on each. I will expand further each of them as a rewatch them.

As detailed in my past article, I opened the event with a discussion on the nature and history of the “roguelike” term (check it out at youtube). Funnily, my research indicates that the term was the “less worst” of a set of choices, but within some years of being used it just stuck.

I also talked about the relevance of keeping the concept of a traditional, turn based roguelike, but letting the single “roguelike” term evolve along with the games that use it.

How much time will new played needs to get to the fun part in your game? Provide as less friction as possible, make these few first minutes worthwhile.  (stub)

Jim Shepard, dev of Dungeonmans talked about metaprogression. “A game between the games”. It goes against the “permanent consequences” facet of traditional roguelikes, but that’s what kids want these days.

Adding meta-progression features demands more work to balance the game session experience, one way to help this would be providing the players with additional experiences, instead of giving them advantages over successive game sessions. (stub)

Why bother adding curated narrative to a roguelike, where players are meant to create their own stories? (stub)

Spelunky’s level gen is the greatest achievement on procedural generation of the decade. It’s elegant and not elegant at the same time. About 30% of each area authored area is dynamic, with smart subtle variations. (stub)

Random elements add variety and invite players to spend more time in your game. Skill and randomness can coexist. Frustration from randomness can become motivation when players blames the rng for their lack of skill. (stub)

In this first talk, Thomas discussed several topics including using a crowdfunding campaign to gauge interest in your game and how the only one really important source of contributors for your campaign is yourself. Crowdfunding platform or other services have little impact attracting people, it’s up to you to make the best impression you can to build trust.

Most of the measures taken to increase pledges in the campaign had little impact. The only important variations on contributions were more related to timing: the moment when the funding goal was reached and the countdown to the end of the campaign. All in all the most important part was having an existing community interested on the project.

He also shared how running the campaign on Indiegogo costed the campaign 50.000 USD and the loss of great marketing opportunities because of nuisances of payment methods.

After the campaign finished, Thomas reported the team has spent around a quarter million usd on the development of theplanned features on the campaign. They were over optimistic on what could be done and missed some costs such as legal, taxes, and physical perks and their shipping.

— A skeleton, but even spookier because Halloween (@skeleton_hugs) November 12, 2017

I missed two talks (because I escaped to the Game of the Devs). I’ll add more info about them when I watch them on the archive:

Second day started will lots of exciting announcements by Thomas Biskup including:

And finally the unveil of Ultimate ADOM, an ambitious project (evolved from ADOM 2 so it’s an independent codebase from ADOM) which includes creating multiple versions of ADOM for different platforms (not just ports but special versions adapted to the platform)

Ultimate ADOM will also allow the team to work outside the tech boundaries of Adom and provide a new plotline.

Thomas discussed the architecture which will include the possibility of mods and will allow to adapt to the different platforms. The engine will be based on an Entity Component System which will allow us to do complex and cool things in little lines of code and with easier maintenance.

An early version of Ultimate ADOM for mobile, powered by Unity, was showcased live, as well as a working prototype of a large test dungeon level.

In Caves of Qud, every time you start a new game a new history around 5 new sultans is generated. There’s no direct insight of this history, you can only learn it by interacting with the world (painted bottles, engraved wands, statues, etc).  The map generators work based on properties generated by this higher level history generator.

All your findings are collected into your journal.

Caves of Qud Histories are generated as chains of events of different types. The items in the game reference these events and give you quests. They discarded a hero-journey-like structure on the history generator, instead letting the generator run wild based around expected life events. (stub)

Roguelikes are special in that they make it easier for players to create stories without any need of complex procedural. Players can have unique experiences they found interesting in a personal level.

Crafting immersive emergent story generators is a mix of things that wont change, meaningful things that might change, and things outside control.

Not all of your procedural generated content has to be great, as long as you are able to grab the player’s attention with some of it. (stub)

What’s the current state of using machine learning effective on videogames? for things like procedural content generation we are still on very experimental level (whereas some things like behavior analysis for ad targeting are pretty advanced)

The ultimate goal should be making procedural content look like it was made by a person, using symmetry and less “precise” numbers can be helpful for this. (stub)

How to make a succesful game without being a good game designer. Players like touching things to see what they are.  (stub)

Slime molds thru the roguelike history, and their origin. Michael Toy and Glenn Wichman’s history on UC Santa Cruz has a lot to do. Slimes are harmless, intelligent, beautiful and delicious.

In Starfreighter, every party member has its own mood. How to get players invested on them? don’t present all info about the character upfront. Reusing characters through games allow players to build a longer term relationship. (stub)

Platformer roguelikes, games where players can be successful with different skill sets than the traditional ones. Creating a genre mashup also helps innovation.

How have some traditional roguelike features been adapted to roguelike sidescrollers? (stub)

Can roguelikes serve as a method to learn to lead and being a better CEO? Challenges and structures of roguelikes are similar to running a company. (stub) 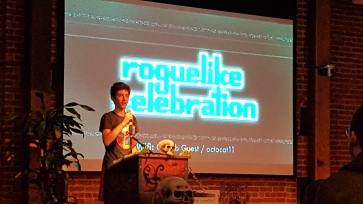 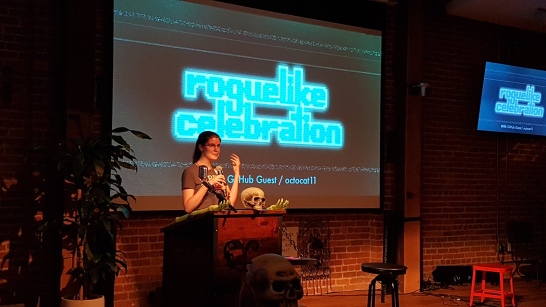 To close the event, Adeon, the fastest nethack speedrunner on planet earth performed a live speed run. It took him around 1 hour and 50 minutes to finish the game.

One of my favorite parts of the event is having a change to meet and talk with awesome roguelike developers, some of the cool people I got to met: