Back on 1996, “multimedia” computers appeared in my city. It was the SoundBlaster craze, and it was not easy to have one at home (specially if your family was not particularly rich). An aunt of mine used to take me to the local library, were they had set up a room with these amazing machines.

They had a bunch of software, mostly interactive children stories, but one of them was of special importance to me… it made me realise these machines could be used to transport people into virtual worlds for them to explore.

It was a multimedia package about Leonardo DaVinci. I remember it had a lot of neat content (and probably made me become even more interested on engineering), but what I remembered the most was two games that came bundled with it.

One of them, the one that dug into my soul, was about exploring a fortress, solving some puzzles in order to escape. This one defined many things on my game development life: computers could simulate a lone adventurer, exploring closed quarters on his own. I am a single player games kind of guy, I like the intimacy between the game world and the player.

The other one was about flying around the world with mechanical wings, dodging stuff in your way. The music was forever burned in my head… I could remember it perfectly, even after so many years of not playing the game. This game was hard, I could never win it when I was younger.

So, last month, over one of these nights where I cannot sleep, I decided to look for it. It was not easy… I didn’t remember the name! I just remembered it was about Leonardo DaVinci, and that it was a multimedia thing…

After lots of websurfing, I found some videos on youtube: they were the encyclopaedic part about some of Leonardo’s discoveries.. I never found videos with gameplay from the games, but I was sure this was it!

Some more digging around, and I was able to find it on Amazon. Instaorder. 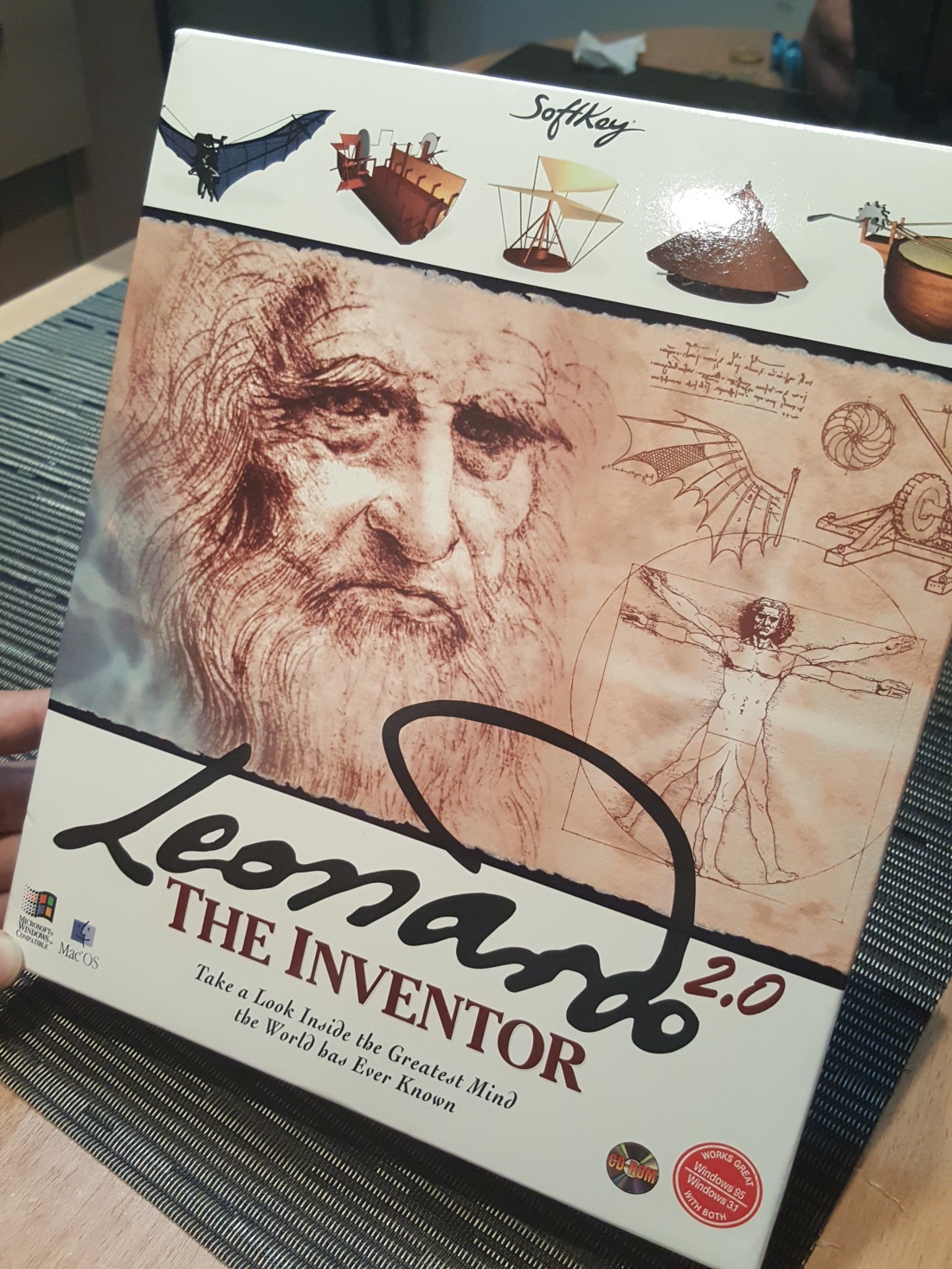 Since I was unable to find any interesting information about it on Internet, I decided to do a video including the unboxing as well some gameplay of it. I hope you enjoy it!!!

It was not easy to get it running… It’s a 16bits Windows program, which means it cannot run on 64bit OS (like my noisy windows 7 box). After trying my luck with Wine (unsuccessfully), I went for a full Windows XP VM using VirtualBox. It took some tweaking but I was finally able to get it going!

At long last, after 20 years, I was able to beat the Icarus game! It took a lot of learning, but in the end I managed to do it…  It’s not in the video, since it took me about 1 hour (or more?) of trying, but after dodging cannonballs, planes, more Eiffel towers and even tornados, I found a dragon (!) which I swiftly dodged to get to the finish line 🙂

Now I’m curious… this is version 2.0. May be I should also get version 1, and play around with it… I wonder if it also includes the games…

Here are some more pics for the curious

Behind the scenes… the suboptimal process I followed to record this video. I am fully aware iMovie is not meant for this, but that’s the tool I have at hand 🙂

Intro and unboxing (on my macbook)

Back on my macbook

I could have saved myself a LOT of time if I had set up VirtualBox on my Macbook… I was just lazy to get an external CD drive or fetch the ISOs from some place and take my time to set it up. Then I could have recorded directly with Quicktime Player + Sound Flower, probably to a much better quality.

2 thoughts on “Leonardo: The Inventor”