Here’s a summary of some GDC 2019 parties and events based on my experience, hope it’s useful for someone planning their next GDC journey! You can also see my summary from last year.

For each one, I tried to categorize it under a type and rated how nice it was for me. This year I didn’t hit as many parties like last year, but still had great fun. 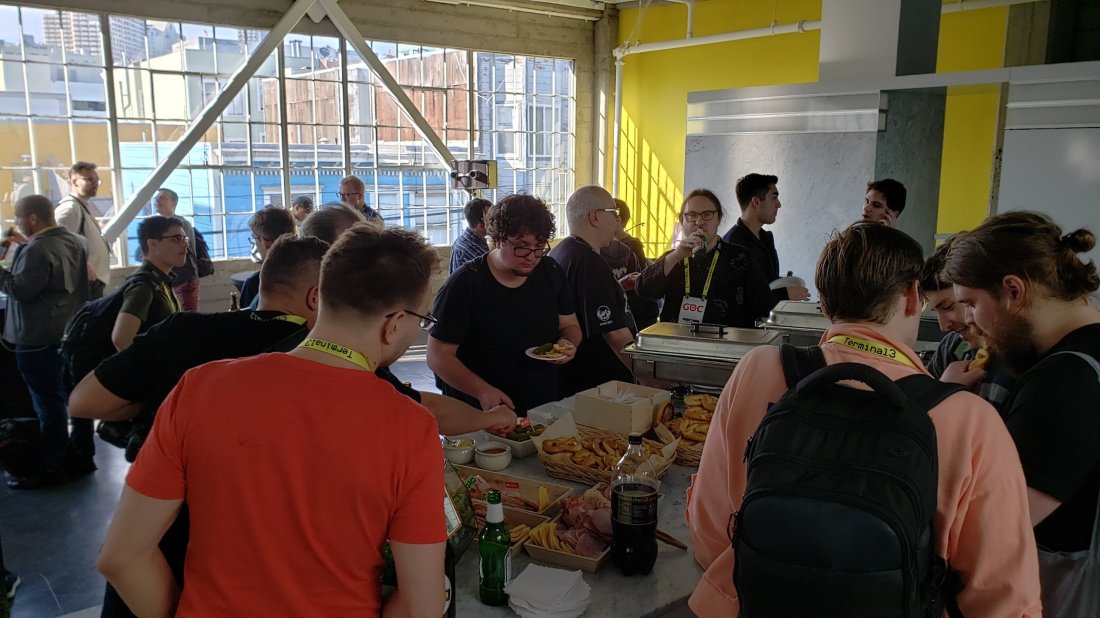 Check out cool games made by Polish companies, eat amazing Polish food, drink lots of Polish Vodka and beer. What could go wrong?

Great venue with lots of fun activities, good food and drinks, and lots of networking opportunities in a talk-friendly space. 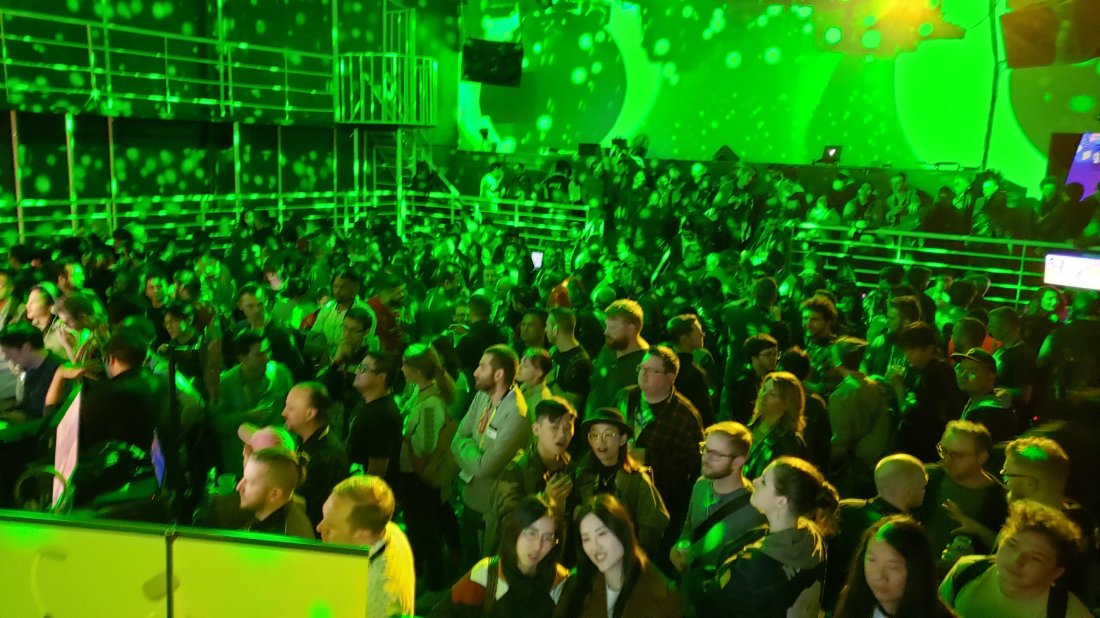 Some good games there, but not as many as last year? and definitively too packed and loud, so it was hard to actually check out the game, let alone talk with someone.

If you like chiptune music you cannot miss Pow. Great DJs and a cool atmosphere, nice merch from underground DJs. Awesome performances. I missed the separate “chill room” from last year where you could relax for a bit while listening videogame OSTs, but the main stage was definitively better and full of energy.

Good for networking, nothing really mind-blowing. There were some cool activities tho (like a photobooth?) and some swag from XBox. Always a good chance to meet fellow Latin american developers.

Amazing meetup of the roguelike developers community with devs of influential roguelikes freely available to talk, and many roguelike enthusiasts talking about their projects. Hope the organizers can keep the meeting happening in upcoming GDCs!

I somehow missed taking some pics this year. It was more packed than last year extending into Zynga’s arcade basement. Nice food and drinks, music a bit too loud to talk so actual networking was hard, there were fun games around too. 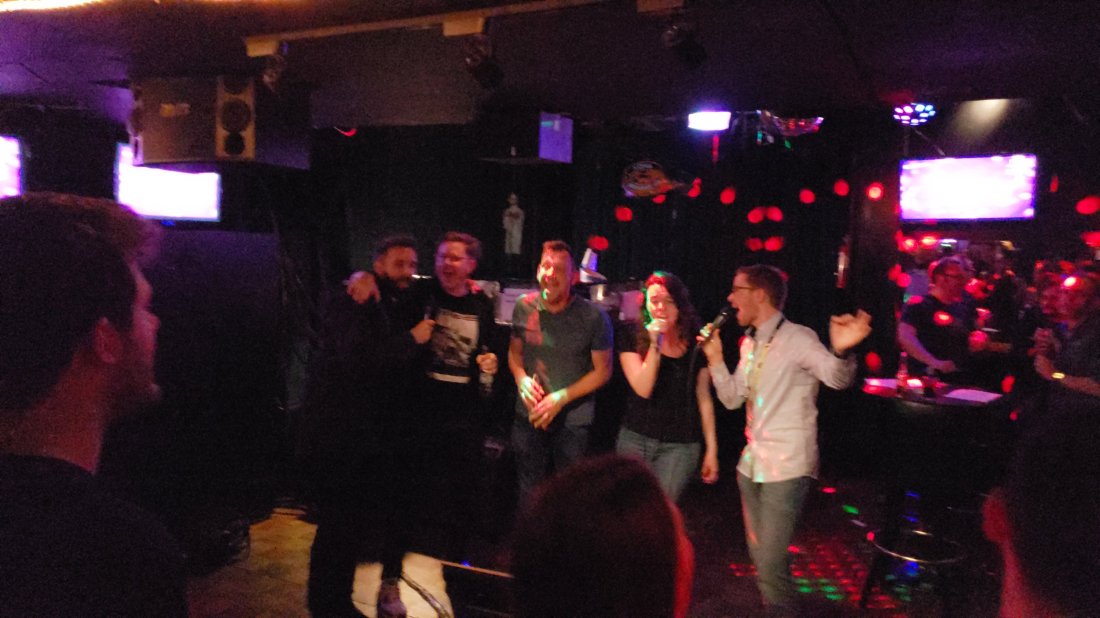 The venue was not very good this year, it was too narrow and small, and didn’t have a properly elevated stage. The hosts were not very fun, or maybe I was just not in the mood. Plus, there was no additional fun stuff being displayed (like in 2018). So it really felt like a setback.

Although the venue was a bit packed thru the night, the game selection was great and the music had just a good volume to be able to talk with people while still getting in a videogame mood.

Closing Party at The Foundry 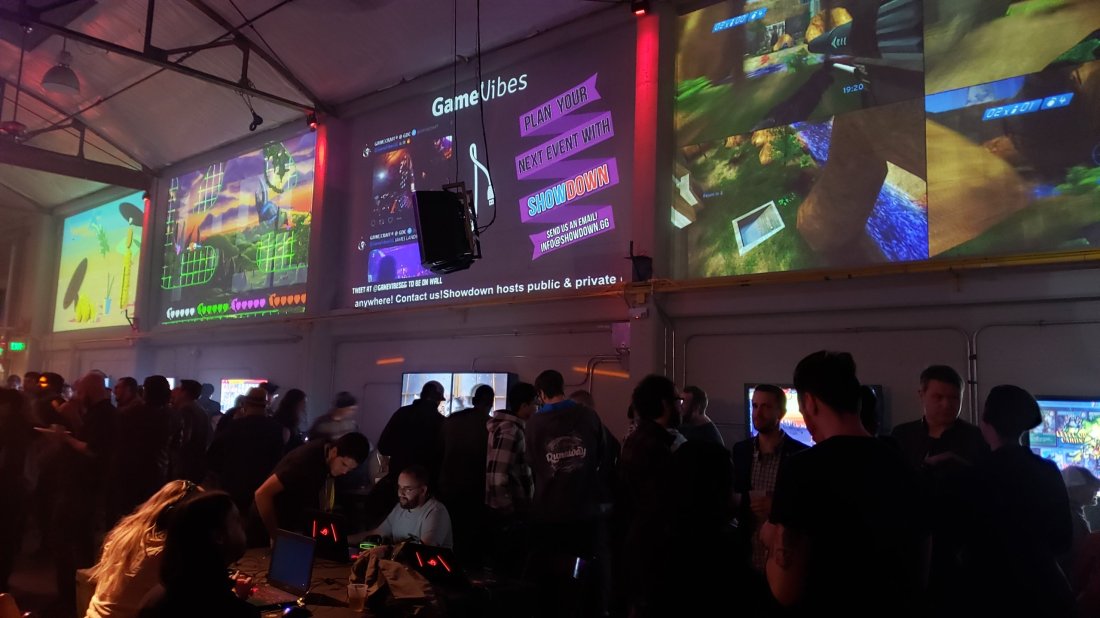 Great space to play videogames (modern and retro) with your friends, in giant and tiny screens. Sadly I don’t have friends that do this kind of thing, so I was mostly checking other people play.

Some parties I missed because of conflicting schedules:

Also, that.party was cancelled, seemingly because of conflicts between the organizers.

Here’s a summary of some GDC 2018 parties and events based on my experience, hope it’s useful for someone planning their next GDC journey!

For each one, I tried to categorize it under a type and rated how interesting it was FOR ME. I also marked the parties where I think you should still have a good time even if you go alone (this is important if you don’t have friends 😦 )

After an initial networking time (lots of good food and drinks), there were three talks: one about the current status and plans for Kongregate (nice one), a pretty weird one about ideation in games which was fun, and another one (pretty good and practical) about taking the right amount of risks while developing a game.

This year, as far as I could see, it was a fairly standard club party. Drinks were a bit expensive. It’s loud so it’s hard to network except on the line to enter the club. Also since it’s on Monday it may be a bit out of place to get crazy when you are on GDC for business. 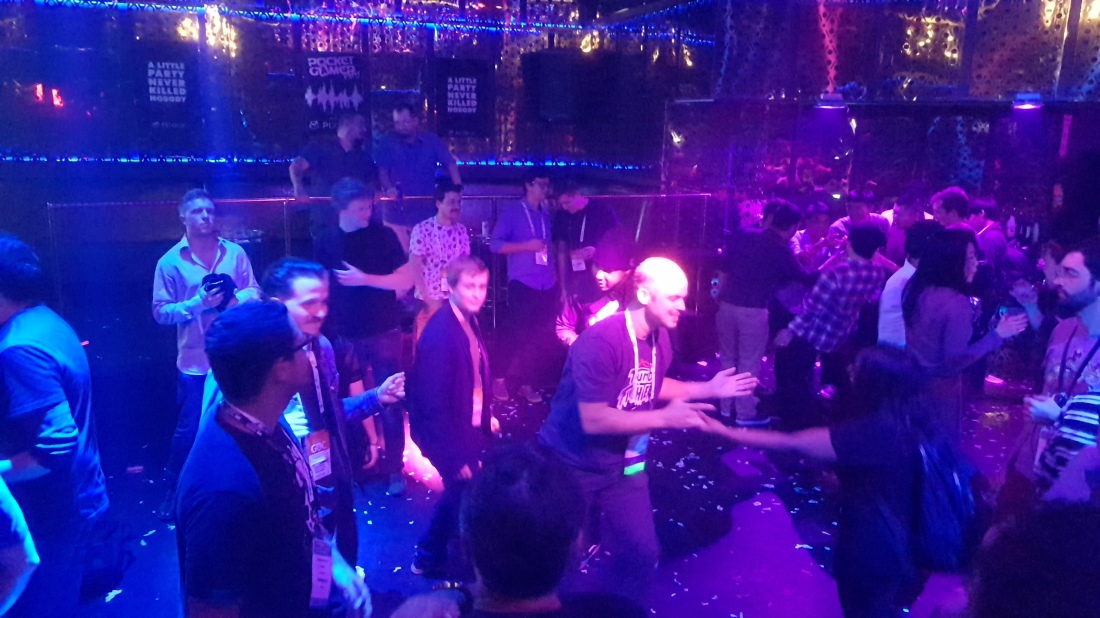 I’m not sure how I ended up in this one. It was interesting tho I didn’t do any networking since I just didn’t feel this was my target community. There was a talk about applying serious games to youth audiences and then a short ceremony to deliver community contribution awards. Still nice to check out Google San Francisco building with a great view of the Bay Bridge.

There was good food too.

Some games (not many) put together in the awesome Github HQ at SF. The main conference area was occupied by a versus game where you competed in different obscure games for about 10 seconds. There was also a multiplayer coop game where you had to navigate in a ship-like thing with your friends, and another one you controlled with a telegraph-like device.

The cafeteria was open for you to bring your laptop and display your game, I saw a couple interesting games there. This one was the one I liked the most for networking (with other developers) due to the nice ambient (great chiptunes!) and everybody being a geek there.

It was supposed to be a celebration of the Global Game Jam but I didn’t really see anything related to it. 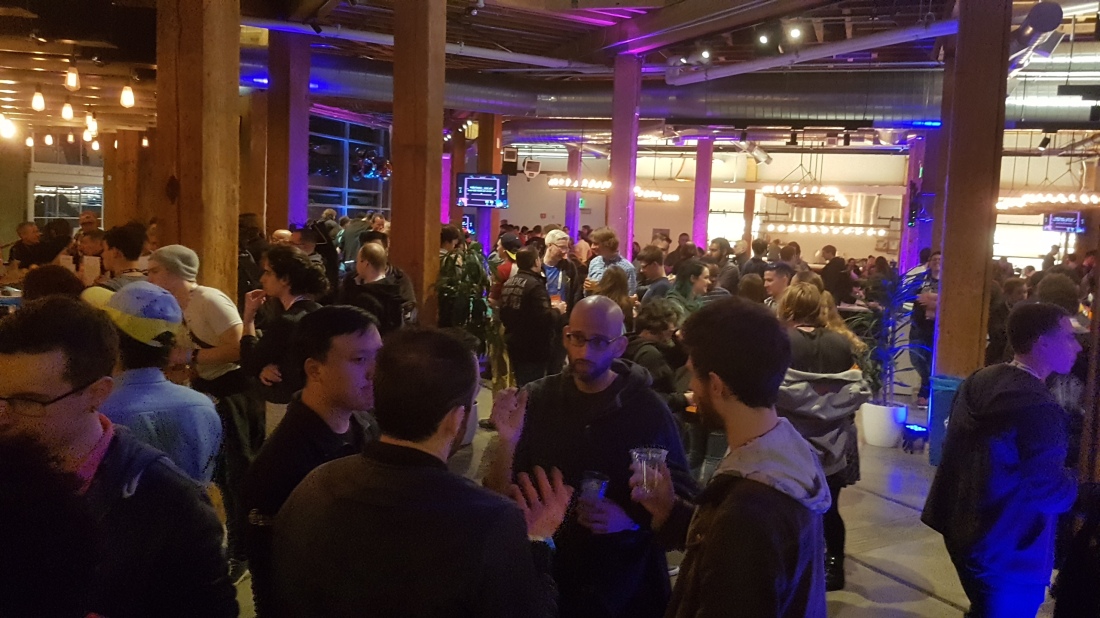 The Other Party (GameJolt Party)

Lots of games put together in a club. Music was a bit loud but you could still interact with the game developers, play cool games and network. Pretty cool if you’d like to check and play some games. 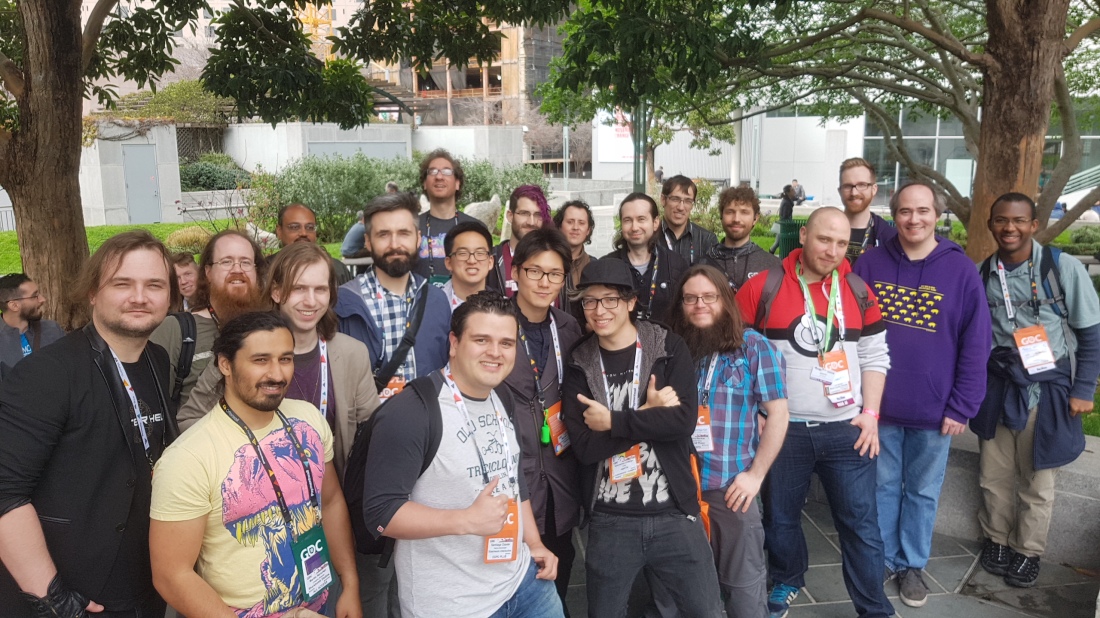 We met together and talked about our games and projects, around 20-25 people showed up which was nice. Planning to do something cooler for next year (hope I can gather enough people again!)

This one was a bit of a let-down, but maybe I was expecting too much. Basically, the entry fee (around 20 USD) gives you access to a hotel rooftop bar to chat with other developers. Met a couple interesting people there tho, but I think they hyped the event and failed to give it more spice.

Nice view of the city tho.

One of the most popular “public” parties at GDC time. Some interesting indie games were being displayed too, and I met some roguelike developers too.

Zynga opened their offices for people to go in, interact with their employees and get a glimpse of what it’s like to work with Zynga. Arcade machines, slot car racing, shuffleboards, three type of hamburgers, beer and drinks. Great to have a fun time with friends! They also provided shuttle service from and to the Moscone.

This one had the potential to be good but I think the venue choice was not very good for the event: it was too loud, too dark and the space reserved for the event was far too tight to fit that many people!

A real shame since I was really interested in meeting other devs from Latin America. I hope next year it’s better!

Same venue as that.party (smaller space tho). Nerd people yelling popular karaoke songs with their lyrics changed to be related to games and gamedev. Nice time if you like karaoke and you bring your nerdy friends. 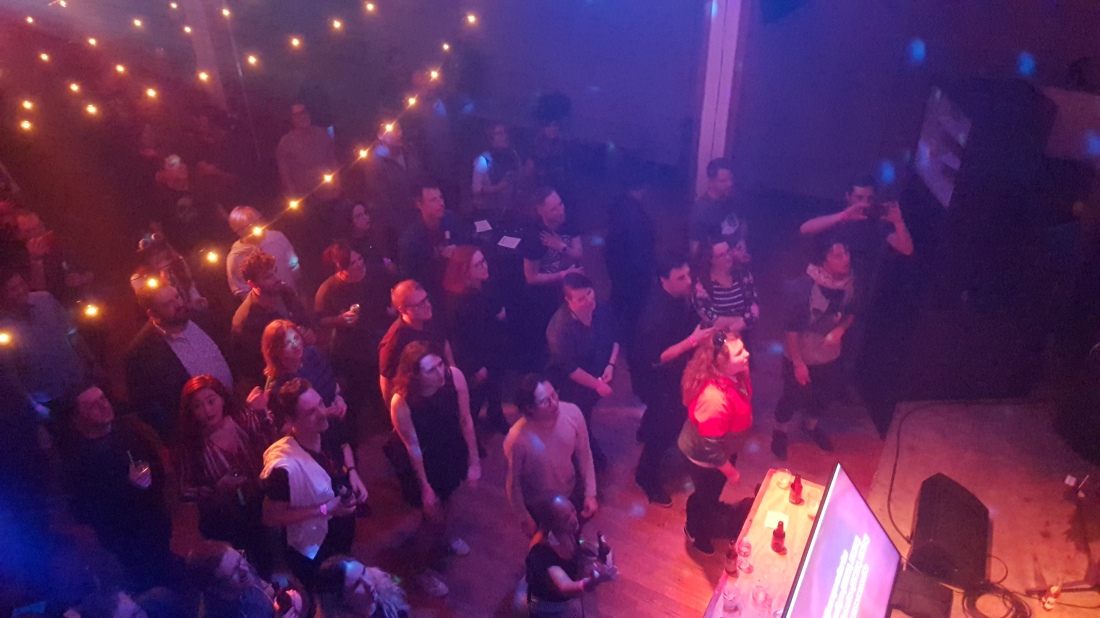 I’m told some famous indie devs can be found around but since I don’t know any that didn’t appeal much to me. This year they also had Botnik displaying cool predictive text stuff including Pokedex entries, sentences that Cloud would say to Tifa on FF7 and more cool stuff.

It was also open tab so cheap/free drinks, yay! 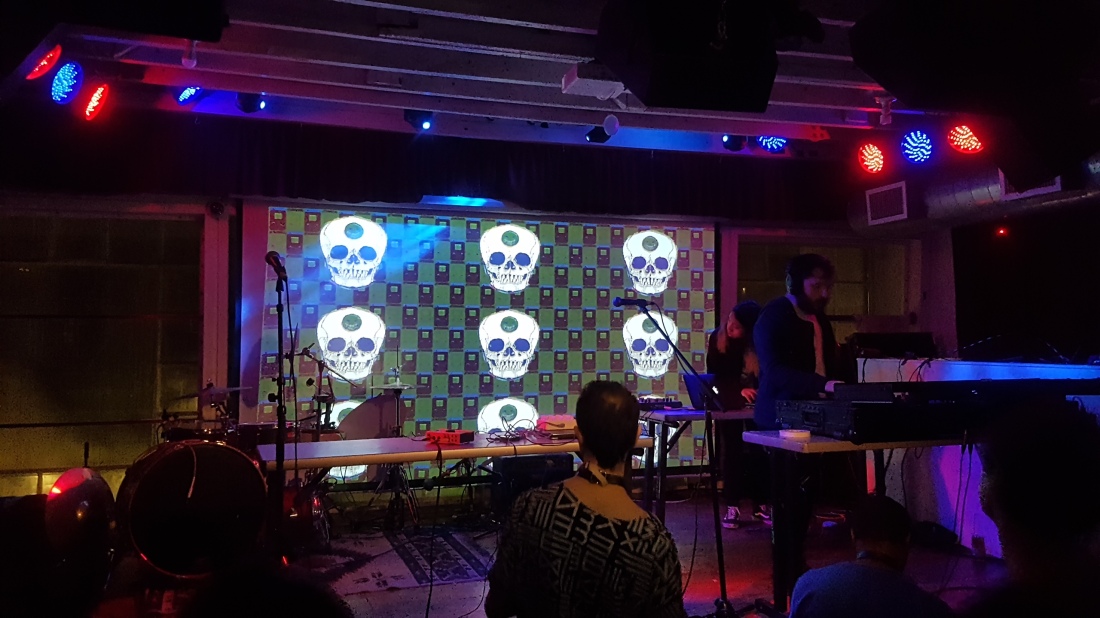 This one had two ambients, one more chill with video game music and the other crazier with stronger chiptune music and people dancing around. Nice way to close GDC, just for fun!