Yesterday I was at a “hack-a-thing” event sponsored by UPB, Ubidots, Intel and I+D Electrónica, made as part of the international Internet of Things day. 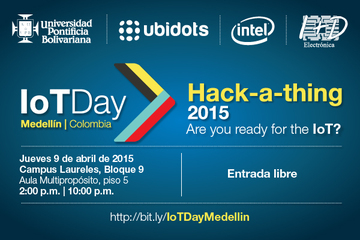 I have always been curious about the scene of hardware enthusiasts, and I had the time to go so I couldn’t miss the chance 🙂

There was an introductory talk by an Intel representative about how IoT is the future today, and a nice analogy of breaking paradigms. Afterwards it was a bit hectic since the audience was very varied, ranging from students with no clue about anything, to people with a rough idea of it (i.e. me) to already assembled teams of hardware hackers. In the end the organizers decided on a Startup-Weekend like format, with people pitching their ideas and the teams being assembled.

I had no idea what to do since I know nothing about electronics… the sponsors facilitated an array of boards / microcomputers and other components (Arduino, Raspberry Pi and some other fancier stuff from Intel and more), but it was a very short time for me to learn how these work and deliver something; I thought on doing a simple game using the Geolocation API so I could work with just smartphones, but in the end I pitched myself as a volunteer from the software side to a team with an existing idea, I needed to know how these things work.

I ended up working with 2 nice guys finishing their electronic engineering degree; they already had an idea for a Smart Home project so we went into it.

The guys had a lot of ideas so what we did first was trying to organize them into a pitcheable product, here’s what I came up with.

The work we did was basically:

After lots of wrangling and work we managed to have something for the jurors to appreciate; the guys did most of the work with the arduino to raspberry communication being one of the hardest part (and I think also the temperature sensor stuff, but I don’t know about that 🙂 )

We struggled to make pygame work to show the data in a small screen of the Raspberry Pi but didn’t manage to have it. However we managed to do the whole trip from the sensors on the Arduino to the Raspberry Pi and to the Ubidots Cloud, and then show them on a web interface, it worked!

The jurors decided our project was pretty nice and gave us some nice stuff, we split the loot and I got a Raspberry Pi which is sitting in my desk now, looking at me asking what I’m going to use it for… I don’t know yet but I’ll know soon!

Other prizes included an Intel Edison microcomputer (which I think is pretty cool!) and some merchandise from the sponsors.

All in all, thanks to the organizers of the event, I learned a lot and met some cool people, hoping to see more of these being done in the city!