October 23 to 26 2018. Colombia’s biggest technology-related conference (Official Website). Organized in Corferias in Bogotá, by the Colombian Ministry of ICTs (MINTIC), and sponsored by many organizations including SENA (National Learning Service) and Procolombia (Government Agency for the promotion of tourism, foreign investment, and exports).

The event served as an umbrella for different sub-events, including Bogotá ACM SIGGRAPH 2018 which was probably the biggest and could well be a stand-alone event. Besides the opening talk by Adrian Molina (co-director and writer for Pixar’s Coco), I didn’t participate in any of its other many talks. However, their guests were top-notch, I’m sure all of their talks and masterclasses were good.

More to my interest, there was also a “Business Showroom” organized by Procolombia / Colombia BringITOn. The format was a standard buyers/sellers match-making, categorizing the interests in two broad areas: “Animation” (including 3D Modeling, 2D/3D Animation, Visual Effects, Sound Engineering, as well as different types of coproduction / distribution / publishing deals) and “Video games” (with some overlapping categories but including development on specific platforms such as HTML5, Unity and Unreal, as well as publishing for PC, Console, Mobile and VR).

It ran for 2 days, with each participant having 14 slots for meetings, as well as a space for quick “speed dating” meetings. Overall the quality of the participants was very good, and the organization was great. Some of the companies that sent representatives were Turner International, 2K, Electronic Arts, Apple, Bungie, and Epic Games.

Right by the business room, there was a space to display the video games and animation products made by Colombian companies. The overall opinion of the international visitors I could talk with was that the level was very high, and the evolution of what Colombian studios are producing is amazing.

Another big part of the event was the conferences; there were tracks on animation, video games, music, entrepreneurship, media, digital advertising, cybersecurity, and fintech. Each track included conferences, workshops, and panels on the specific subjects.

The track of conferences I was more interested in was, of course, the video game development one, which covered topics such as UX, marketing, legal and workplace culture, and had several panels where developers of own Intellectual Properties, service providers and publishers shared their experiences and tips for success. I wrote a bit more in deep about one of these panels here. 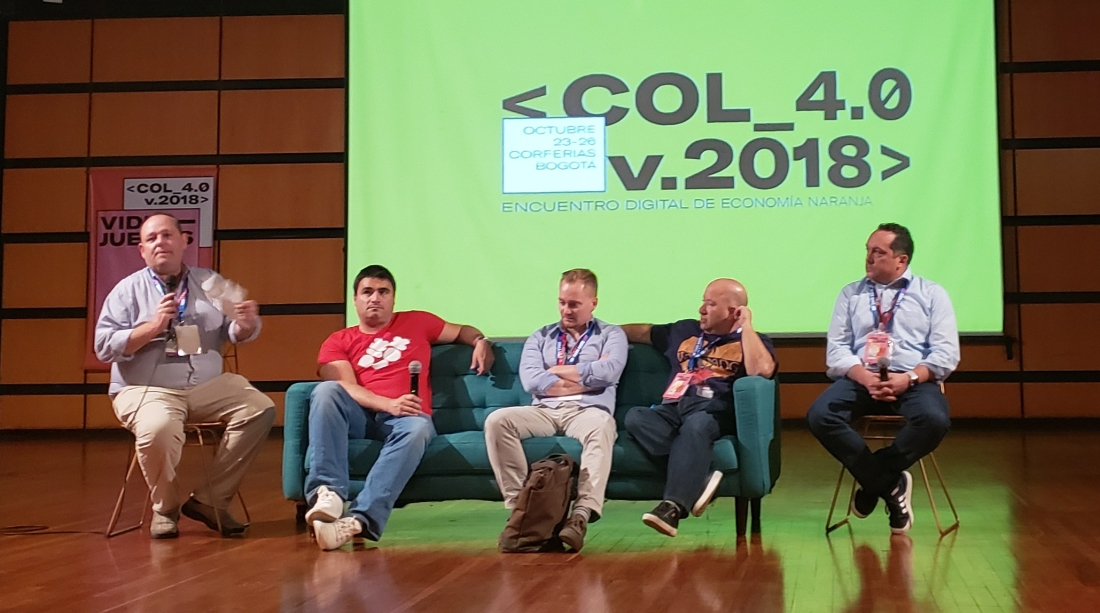 A final part was the expo floor, of which I could only take a quick tour through. In there, there were local universities displaying the innovations on their IT programs, a showcase of apps made in Colombia (including a section for Agriculture focused ones), a bunch of local companies showing their products and services, and probably a lot more that I missed.

As with all good conferences, it was also a great chance to meet with game dev friends and make new friendships too; the IGDA Colombia Meet and Greet gathered a lot of the game development scene from Colombia as well as our visitors, stories were shared and new friendships were formed.

All in all, Colombia 4.0 is a great event for IT enthusiasts, containing a lot more than you can probably check in three days. Fortunately, most of the talks are recorded so you can check them out in their channel. Unfortunately, for the ones I was able to check the audio was dubbed to Spanish so that may be an issue if your Español isn’t very good, and no English translation seems to be available for the Spanish ones.