The second video for the SlashBit Retro Cinema is up!

While I didn’t invest as much time on this one as I did on the Castlevania one, this one has a long story going back to 2015 when I started working on the map hoping to have something like the video ready before the start of Season 6. That didn’t happen but I pushed forward to finish the 128×256 tiles map and then further worked on it by adding google maps support for it. 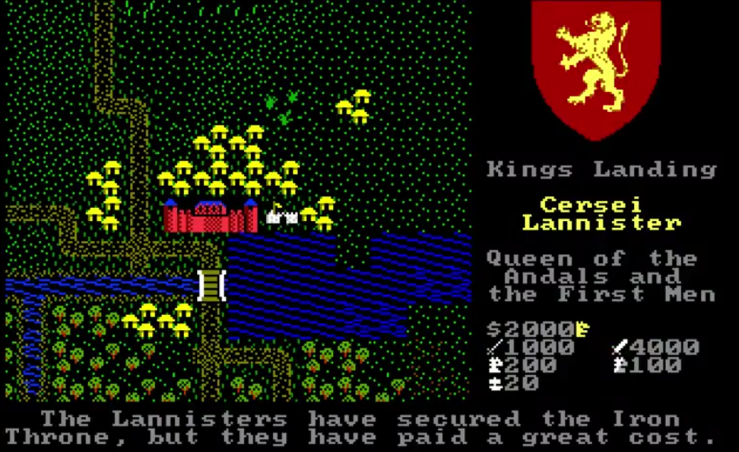 It stayed that way for over a year but with the spectacular Season 7 underway I decided to revive the project and got working on it after finishing the Castlevania one. Ashton created an extended version of the track and I made the sigils of the houses using an EGA palette. I also did some tweaks on the map graphics specially to make some castles and places look more like the ones on the series.. 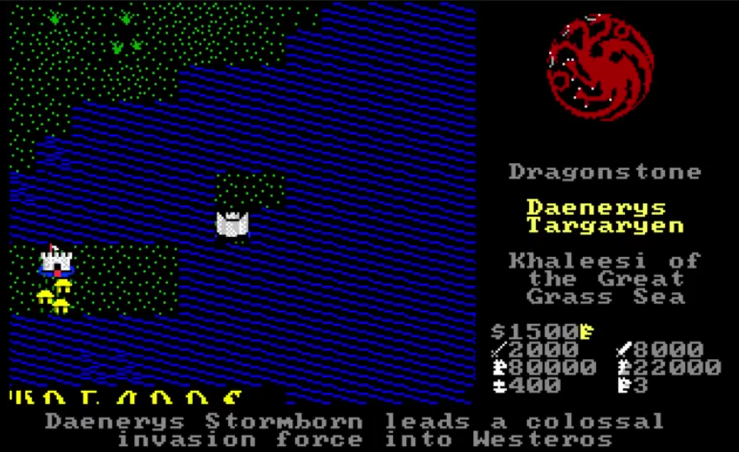 The first version I created didn’t have the zoom effects. I still think it looks more authentic than the final cut but the feedback I got was that it was hard to appreciate the scale of the world. I am not sure something like this could be achieved back then without a special video card, at least not on a PC with an EGA or VGA card.

I did some research in order to assign the stats for each one of the houses. Most of them are just raw approximates which I thought made sense from the little available data.

I’ve finished another low resolution map, but it’s part of a secret plan so I cannot unveil it yet… you will have to wait 8 months to check it out 🙂

Here’s a small teaser for now

I added Google Maps support for my Pixel Westeros Map, what it means right now is instead of loading the whole map at once, it’ll be loaded by fragments as you pan around. A downside now is that you cannot zoom out (I’d have to create a scaled version of the map for that to work properly), but on the other hand it looks much better on mobile.

I might add markers for some of the places sometime soon.

I started working on this one last year, thought I’d have it ready by the start of Season 6 of the show and even thought on doing a small video in cooperation with Ashton Morris using his 8 bit track.

As usual, this couldn’t be done… however I decided to push forward and at least finish the map 🙂

This is a 128×256 map using a combination of tilesets: Denzi’s 16×16 retro terrain, Ultima 4 and Ultima 5. Denzi’s terrain tileset was fun to work with, with much more terrain variations than classic Ultima ones. The map contains the major settlements and castles, as well as the roads and rivers. I used a lot of source material from A Wiki of Ice and Fire to build it.

Take a look and enjoy! (Click for full resolution)

LRUMP is back! I created another map, based on the events of the latest Hearth of Britannia event.

For this one I based myself on U4 Bucaneer’s Den, increased the scale by 3X, and then used the map of Castleton as Buccaneer’s Den, made by Rustic Dragon for the event. You can find the source files at the LRUMP repo.

This detailed map of the isle depicts the combat between the forces of Lord British and Lord Blackthorn in the Northern Fortress, as well as the town of Buccaneer’s Den (also known by the locals as “Castleton”), the ruined shrine, the dungeon, and many other features including Lord’s British mansion on the isle.

Ok, I think I’m done at least for now… I just can’t get something out of my head once I start, this kind of mini projects hijack my mind and derail me from other things I really should be doing, but I’m ready to give this a rest.

It’s done! You can check it out online at http://slashie.net/ultimacastlegen (images are not preloaded so it may take one or two generated maps for graphics to show up)

You can also check the source code at github (It’s not super beautiful, but it was fun!).

As it stands, it generates a single floor layout of a castle based on the design of the old Ultima games, specially Ultima 5. It goes roughly through 4 phases:

During day 8, I did the following

There is certain room for improvement, and there’s of course the question of adding the basement and additional floors (and connecting all together!). But from what I see, that would take a bit of time.

Doing this generator was pretty interesting… I learned a couple of new tricks I hope will be useful for other projects in the future. 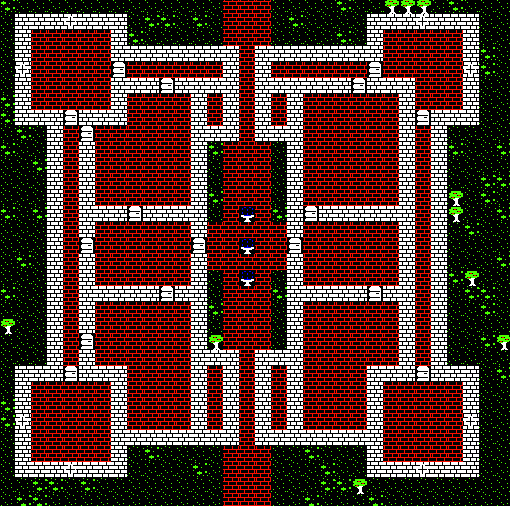 Rooms are now linked together, to do this I explore the rooms recursively, starting from these west and east of the courtyard; I scan the map for nearby rooms on each direction, recording the limit segments and then I pick a random place from the segment to place a door. Then I explore the connected rooms repeating the process, as a result the whole map is connected.

Working on the base rooms of the castle, so far worked on the following:

Version 1, calling for all Tolkien fans for comments for improvements 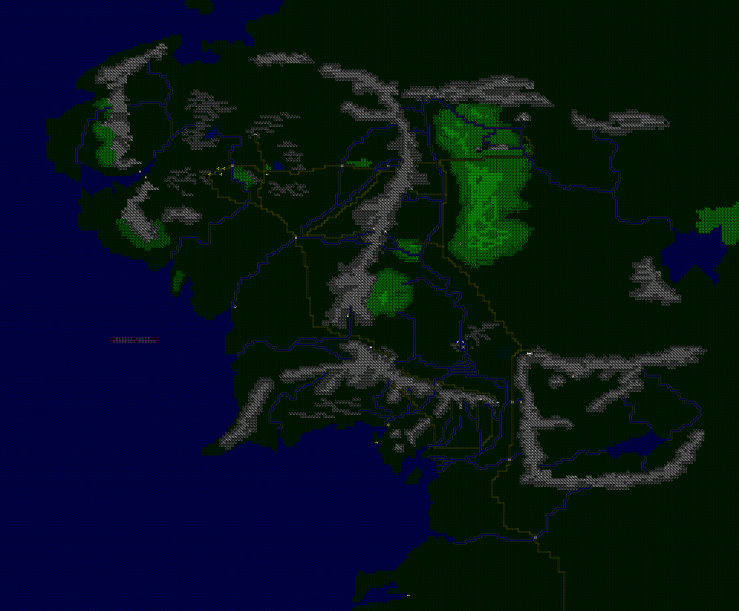 After the destruction of Exodus, a huge cataclysm destroyed most of the world and reshaped it forever. Mountains rose, lands sank, and in the end the world changed into what we have come to known as Britannia. Lord British emerged as the major ruler on the land, and seeking to have a way to control his subjects he called forth for a champion of virtue to be found.