Day 6! time’s almost over and I wonder what’ll be the best way to wrap up 😐

Today I managed to implement high level map generation (so it now generates both a random overall structure as well as the actual detailed maps). They are both simple, of course, since there’s no time to go in-deep. This includes assigning the gym data, pokemarts inventory as well as wild pokemon on the routes.

Spent a lot of time debugging an issue with the validations to prevent roads from overlapping not working.

Pokemons also respawn now on the routes, and I started implementing the actual skills and the damage calculation. (Based on the information from Bulbapedia)

I also implemented an alternate display mode which looks a bit like a gameboy color. At least to me 🙂 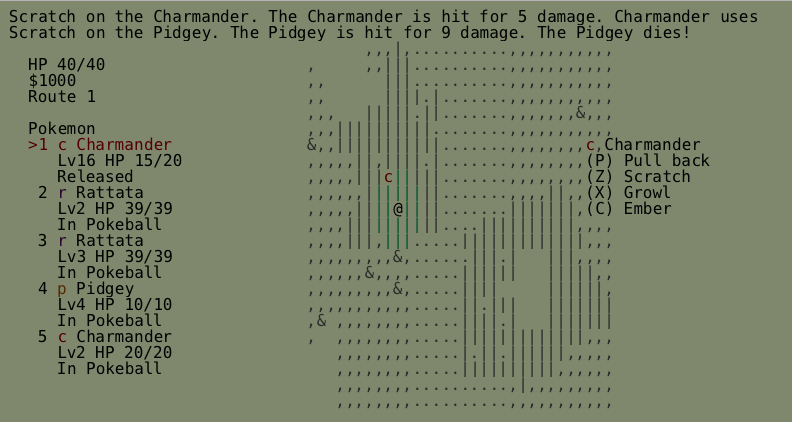 I’m less than 24 hours away from the end so… what’s the plan?

It frankly looks grim, but I knew it wasn’t going to be easy (that’s why I hesitated). There’s enough material here for a seven years roguelike. The challenge will be wrapping up decently.

Pending stuff (not all of it will make it):