It’s been almost three months since the last update. And many things have happened!

We finished the CREA Digital project and managed to push the game forward greatly. Then we continued working looking forward to having a public release this year. Below is a gameplay video showing what we have so far.

Doing a full changelog would probably be huge. Instead, I’ll share some pics of the more visible changes, noting that there are also great advancements in the music and sound effects.

We continue pursuing the best way to display the “overworld”; we did some changes in the perspective and added back the followers to the player (we are planning to add more variety to these units so instead of the same battle units you’ll have carts, people carrying stuff, etc). They also behave more organically now, following the player in a less rigid way.

The overworld is also now more rich with models for the different sizes of European Settlements, Mining camps, gold veins, and temples to explore. Native cities also are now displayed using different unique models for each in the history mode.

We added a separate procedural terrain generator for highlands, canyons, and deserts. It uses pure Perlin noise instead of the random midpoint displacement used for the island generator. This generator was incorporated into the history campaigns too, increasing their replay value; in order to do that, we had to make a hybrid out of it, to add predesigned content (or rather locate it at general positions in the map). Another big chunk of work was for the grass terrain, painting patches of grass to make it look less homogeneous. One of the most visible changes from the last update is the appearance of forests, still a work in progress but it seems at long last we’ve found a way to represent them adequately and performing well. I decided to use full detail models instead of low poly shapes and made some tweaks to make sure it performed decently. We still need to do some work to cover more ground while keeping the FPSs up. Besides the forests, we also did a lot of changes in the lighting of the scene, as well as the post-processing effects.

In addition to the changes in how they are rendered, there were also changes in how forests are generated, placing clumps of trees of the same type together, and selecting them based on the type of tree. We also added a first iteration of drawing roads between locations on the map and having simple “conversations” along the way. The paths are broken down into segments, and the terrain along these segments is set to dirt. Next iteration will feature meshes instead for them to be much more clearly defined, for now, they also include some huts along the way, for a little variety.

For the island generator, beside a LOT of internal changes, we also changed the way beachlines are rendered, to make them contrast more vs the grass. “Snowy” mountains were also removed, giving these maps a more tropical look.

After exposing our working alpha to player testing, we discovered we needed to do a lot of work in player onboarding; we added a helper character that guides you through the first mission, we still gotta have him help you during your first battle.

The entire conversation window was reworked, dialog options are now added dynamically based on the options that are selected, and are capable of launching the Barter interaction or, completing mission objectives. This was complemented by changes in the town popup, to group characters inside buildings and then allowing the player to choose who to talk with.

Speaking of Barter, we revamped the Trade screen and after many iterations, we implemented the foundations of a bartering mechanism where you can trade goods with people in villages that don’t have a currency. 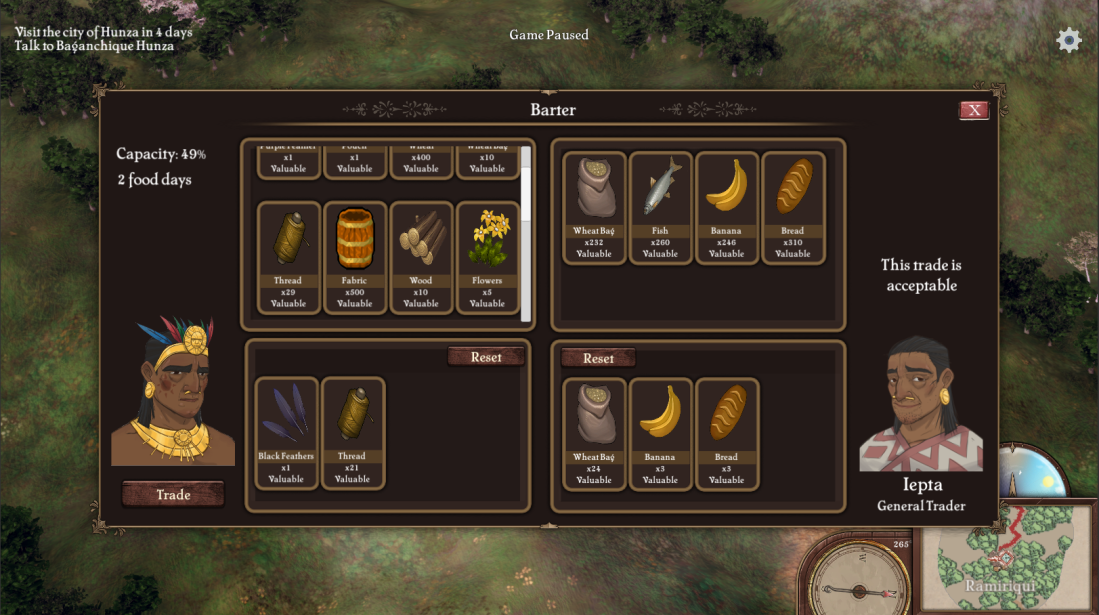 The minimap now displays the direction the expedition is heading, as well as the towns that have been discovered, the roads between locations, and the previously known places and areas at the beginning of each game. The sea is now also displayed more clearly, and the town markers are built based on the size of the location.

Of course, there was a lot of work involved in actually getting the “Children of Bachue” campaign ready in time for the CREA Digital deadline. This included finalizing the design and setting the generator for the first four missions, integrating the cutscenes art and voiceover for them, loading all conversations and characters data from design, and integrating the models for units in combat and overworld.

For the history campaign mode, we added a “narrative mode” disabling discoveries, temples, gold veins, building, camping, etc. and providing more direct control over combat. All this so that the player could focus on unveiling the story and the world.

In order to support some of the missions designed for the campaign, the Discoveries facet was improved by adding items to the player’s inventory on discovery, and adding quests related to bringing these items to a given location.

Similarly, a simple “tracking” mechanic was added where the player can find traces or general directions to the places he needs to find as part of his mission.

Some other smaller changes in the UI include testing a new, more readable font, animations to the compass needle so it looks more organic, and a mission briefing window shown at the beginning of each mission.