Pokemon Go recaptured the people’s imagination of what could be done in a game mixing reality and virtuality. However, after the initial joy, many people started complaining about the lost potential and how they screwed up by not adding some features that could have made the game a more complete experience…

I myself continue playing, but I agree the experience has degraded over time into grinding endlessly for candy in order to evolve my Pokemon, and rarely finding a new one even tho my Pokedex is still fairly empty.

But complaining is too easy, how about actually going ahead and trying to fill these gaps?

I couldn’t get the idea off my head, so even in times like now when I have very little spare time, I jumped into it. This is my very own effort to create a location based monster training game: Professor Slash’s Energy Radar

Use your phone to track different kinds of “energy sources”. Walk to them and once you are close enough you will be attacked by a wild Pokemon, then you have to weaken it by fighting using the Pokemon in your team… the wild Pokemon won’t just stay there dancing for you tho, it will attack back using its own techniques. You can switch Pokemon on your team anytime to take advantage of their skills and types.

Once the Pokemon is weak enough you can try catching it by throwing a Pokeball, your chances of capturing it depend on how weak it is. If all your Pokemon are defeated, you will lose your chance to capture it and won’t be able to face other wild Pokemon until they have recovered (they will recover their hit points with time or you can take them to a Pokemon center by walking close enough to one of the towns in the fantasy world).

The energy sources around you are based on your location in the fantasy world (Kanto in this case). The game map is overlaid on the real world as a 8km x 8km area (approximately), so you have to walk around your city in order to find different types of Pokemon. Even without connecting to a server, all players find themselves around the same in-game location and get to see the same energy sources .

You can train your Pokemon by fighting wild Pokemon or another trainers via Bluetooth. Stronger Pokemon stand a change against powerful wild Pokemon you want to catch.

Creating a full game following this design would be a huge enterprise, beyond what my limited time and resources currently allow. However these ideas haunted me, and I set myself to create a working minimal product which could at least be used to validate them in real life.

The result is a huge mess of code which works pretty decently for the time I was able to invest. An obvious next step in case I continue pursuing this development is doing some massive refactors (all game logic is currently implemented as a single huge monolithic 747 LOC JavaScript module) and optimizations (basically I didn’t care about the CPU for this version so I do lots of redundant calculations, and I don’t really want to talk about the rendering strategy 😛 )

BUT, it works… I managed to have something to experiment with!

One of the things I am going for is being completely server-less while still allowing social interaction between players. This is of course to allow infinite scalability and not having to worry about server loads (One of the main headaches Niantic had/has)

I chose to create an hybrid JS Cordova app just because it would allow for much quicker prototyping while at the same time giving me access to the device services I knew I was going to require:

This, I think, is the core of the app. I used the seedramdom module from David Bau which contains seedable PRNGs that I could seed using a combination of the different locations, time of the day and other parameters. All this in order to make the same energy sources show up at a given time for two players being on the same location, this way there could be social interaction (Hey! There’s a Dragonite near me, come and get it!)

Also, everything is local here. You don’t even have to create an account, all your progress in saved in your device.

This one is of course one of the main features, since you need to move around in order to interact with the world. The cordova-plugin-geolocation provides you latitude, longitude, and even altitude, along with a precision value.

A lot of processing is then done to convert from geospatial references to physical distances in meters. It is a pretty interesting topic I had already visited back on the times of Expedition. This answer, derived from the Wikipedia article, was super useful.

Of course, GPS is still far from precise (and I’m not sure if that’s ever going to change!), some postprocessing and filtering is needed to smooth the sensor readings and eliminate noise.

Current GPS support is awesome, but its accuracy limits make some kind of interactions people are dreaming with impossible. I can understand why Niantic had to force some design choices around the restrictions of current technology.

Used the cordova-plugin-device-motion to get the x, y and z acceleration values using the phone’s accelerometer in order to try to find out if the player is walking, main goal was not having wild battles triggered while phone is lying on a table or you are holding in your hands without moving.

In the end after some experimentation I was able to provide a fairly accurate approximation via a Kalman filter (I don’t know what that is, I just followed this answer from StackOverflow 🙂 )

In order to make it easier to get to the energy sources, the radar rotates based on the direction you are heading.

I used the cordova-plugin-device-orientation plugin for this, it gives you a 0 to 360 degrees value for orientation, then I applied a simple transformation to the position of the energy sources in the radar.

As someone who loved the original Pokemon games, one of the main things I wanted was having Pokemon battles be an important factor in the game; here’s some of the differences.

I implemented a veeeery basic combat system, implementing the full combat rules would of course be a lot of work. I would initially target for the first generation rule set, I did some research around and found some already existing JavaScript games which could be useful. The alternative would be having a simplified system.

An obvious social feature is allowing players to combat each other; following the server-less approach, I picked basic Bluetooth communication to establish a peer to peer link.

Used cordova-plugin-networking-bluetooth from Franco Bugnano, who has some interesting blog posts on the topic. This only seems to work on Android, which is good enough for me 🙂 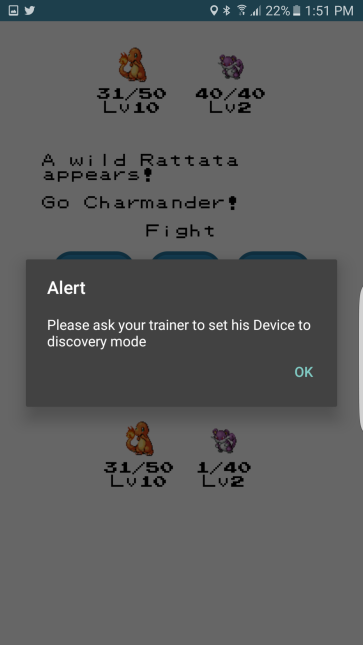 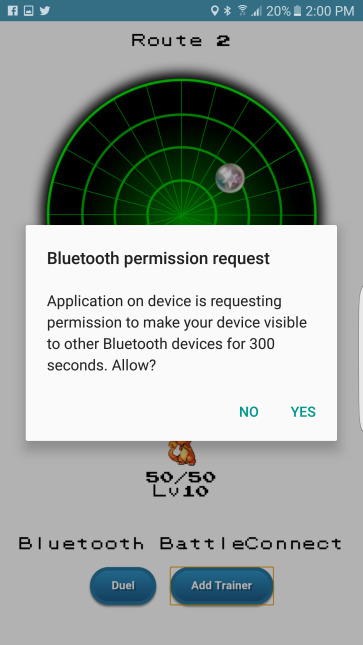 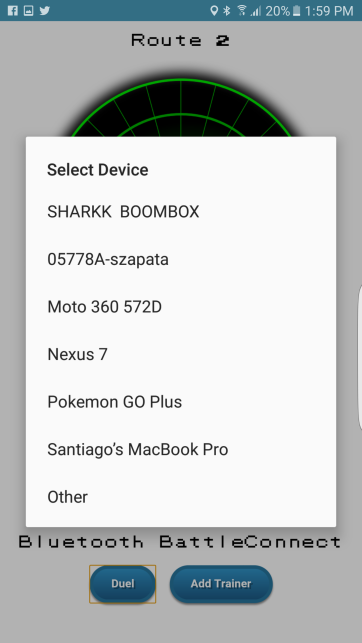 Used when starting a battle and when the pokemon are hit. Just a small detail that the cordova-plugin-vibration plugin allows to do very easily 😉

As a final touch, I used the com.ezartech.ezar.videooverlay plugin from EzarTech in order to show the video in the background while on battle. Future work: Use accelerometer to relocate monster, allow snapping pictures.

Some other things I think may fit the game:

Why bother doing this?

Obviously, I don’t have the license to the Pokemon franchise so I can’t release this game as one my own so.. why bother doing this?

If you would be interested on giving this a shot, drop me a line 🙂