Aeons ago, while developing the world browser for Pixal, I thought on adding a graphical indicator of the current time of the day inside the game world. Denzi then sent me something some pretty cool art, but since Pixal never saw the light of the day… that art was never used.

Some months ago I got my Moto360 smartwatch and as expected the first thing I thought of was, what can I develop for this? I did some tests and created a sample watch (Which I may eventually polish a bit more and release). But then I thought… I really need to use the sun-and-moon scenery from Pixal for a watchface!

The idea was simple, basically to show the sun and the moon cross through the sky as the day and night went by.

Since we already had the animations, I thought on having a minstrel playing music on the ceiling of a tower while the days passed. I was inspired by this animation Denzi had

I shared my idea with Denzi, and he actually had something slightly different in mind, blending the initial idea with a standard analog watch. 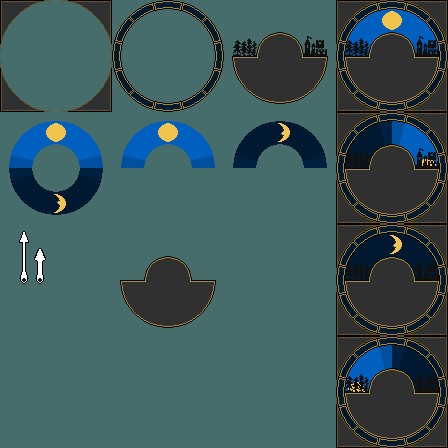 The current result is a bit different than what was planned, but I decided to jump on it and create something simpler; I required some additional art assets from Denzi which I could never get, and I also thought this simpler design without animation works better for battery consumption. 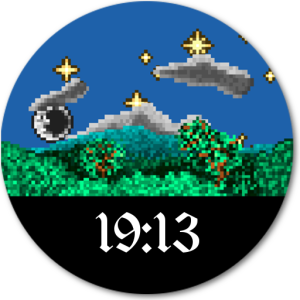 I actually had some features in mind that didn’t make it to the initial version (And probably won’t go in, since I think it’s good enough as it is):

So, if you have an Android Wear Smartwatch, what are you waiting for, check it out at the Play Store, and share with your friends 🙂

(One annoying thing I haven’t been able to get rid of so far is the app asking for the “Account” permission set.)