Yay! I managed to finish! many thanks to Giovanny Ramirez (artist for the project) for his outstanding work and commitment to the challenge deadline… 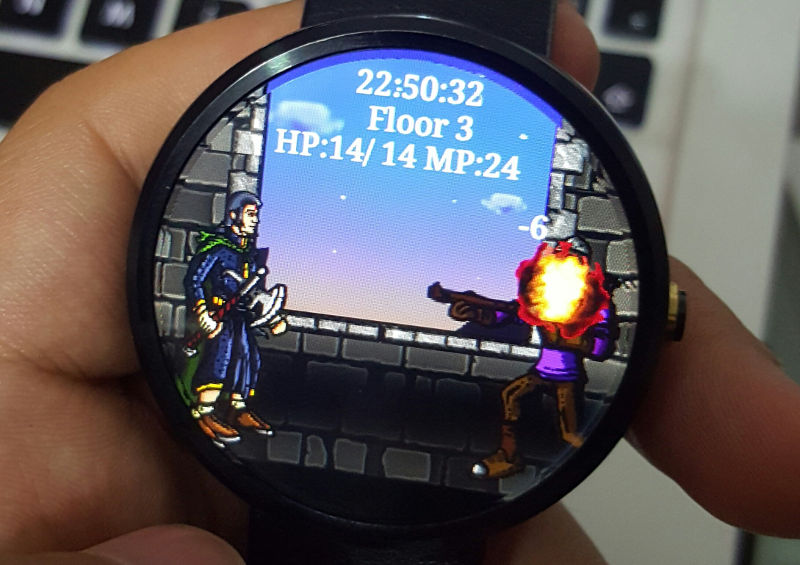 The results are much better than I thought they would be! I aimed for a simple game derived from the design of my roguelike in a tweet. What I ended up doing keeps the same spirit, but I added quite a bit of animations and simple 2D effects, as well as great artwork. In order to do so, I had to create a simple library for sprite management, animation and tweens for Android Wear. I hope you guys enjoy it!

Download now from Play Store! It’s a Watchface so you have to install it in your phone, then it’ll sync automatically to your watch and you can select it on the watchface selector.

You can check a video of it working ->here<-

So, I proudly present you, The Rise of Kramora

Months of meditation in the darkness of the Pits of the Dead have at least provided enlightenment: There is only one way to save this decadent world from itself: summoning the Great Serpent Kramora to exterminate all life, and let new life arise…

All of your life, you have studied scrolls of magic and ancient history which now point you towards your fate: You must climb the Tower of Sephira, the stronghold of the Holy Order of Ananias which relentlessly guards the Ancient Tome of Kramora. Will you be able to overcome the defenders of Order?

Rise of Kramora is a lightweight roguelike designed to be played on Android Wear smartwatches. Explore the Tower of Sephira finding weapons, armor and potions, and vanquish your enemies in melee combat or using magic spells.

As you climb the tower, enemies get more and more difficult but you’ll also get stronger. Can you reach Floor 25 and create a new world?

I only managed to work 5 days this year, this is what I did over the last day:

I spent a lot of time tracking two elusive bugs:

The last hour was particularly interesting, my most awesome feat was implementing the animation for the doors in less than 15 minutes… that’s the sort of thing that makes you feel alive 🙂

Victory for the 13th time!