Today I decided to try to include some of my oldest game projects into my page at http://slashie.net. A couple of them were ArcherFire and NeoArcherFire, the first games I created which included graphics.

Bundled with the original ArcherFire, I found a file which was supposed to be its source code. I tried checking it out: it was a .BAS file so I thought it’d be a plain text file with QBasic source code… I was wrong, it was a binary file.

Then I remembered back then the version of “QBasic” I used allowed saving the source code as binary files for faster loading times. I downloaded QBasic and tried to load the file (Using DOSBox, of course). It failed, unable to read the binary contents.

I googled a bit and refreshed my mind: back then I was using QuickBasic, not QBasic.

A subset of QuickBASIC 4.5, named QBasic, was included with MS-DOS 5 and later versions, replacing the GW-BASIC included with previous versions of MS-DOS. Compared to QuickBASIC, QBasic is limited to an interpreter only, lacks a few functions, can only handle programs of a limited size, and lacks support for separate program modules. Since it lacks a compiler, it cannot be used to produce executable files, although its program source code can still be compiled by a QuickBASIC 4.5, PDS 7.x or VBDOS 1.0 compiler, if available.

I downloaded it and was able to check the source code, finding out that it was Neo ArcherFire, the enhanced version which used DirectQB, and my final game project using any BASIC variant!

I made this game back on 2003, the source code is surprisingly organised 🙂 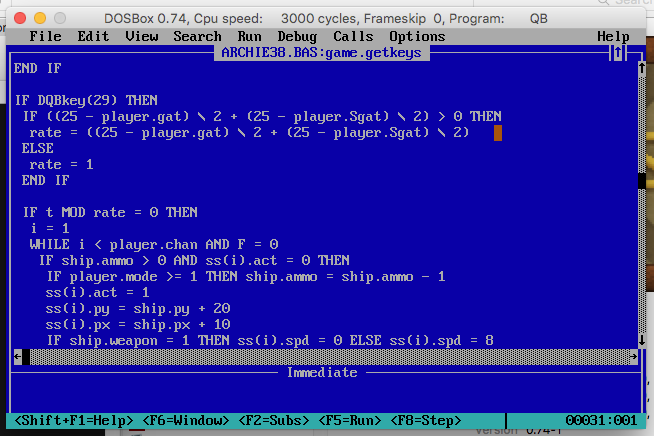 I exported the binary “project” to ASCII, and uploaded it to github, if you are curious you can check it out here, but I’d recommend getting MSQuickBasic so you can navigate the SUBs easily 😀

This game was powered by DirectQB, a lib released in 1999 by Angelo Mottola which greatly extended what could be done by QuickBasic, you can find more info here.

Although this wasn’t really my first game, I think it’s very unlikely for me to find any older source code, it was lost in my old 486… may be some day I’ll find a rusty diskette with it? Some of the things I miss the most are: