This year, for the first time, Comic-Con Colombia was split into two events, the first one took place in June in Bogotá (Capital of the country), and the second part is taking place November 16 to 18 in Medellín (my hometown, fabled city of Eternal Spring). 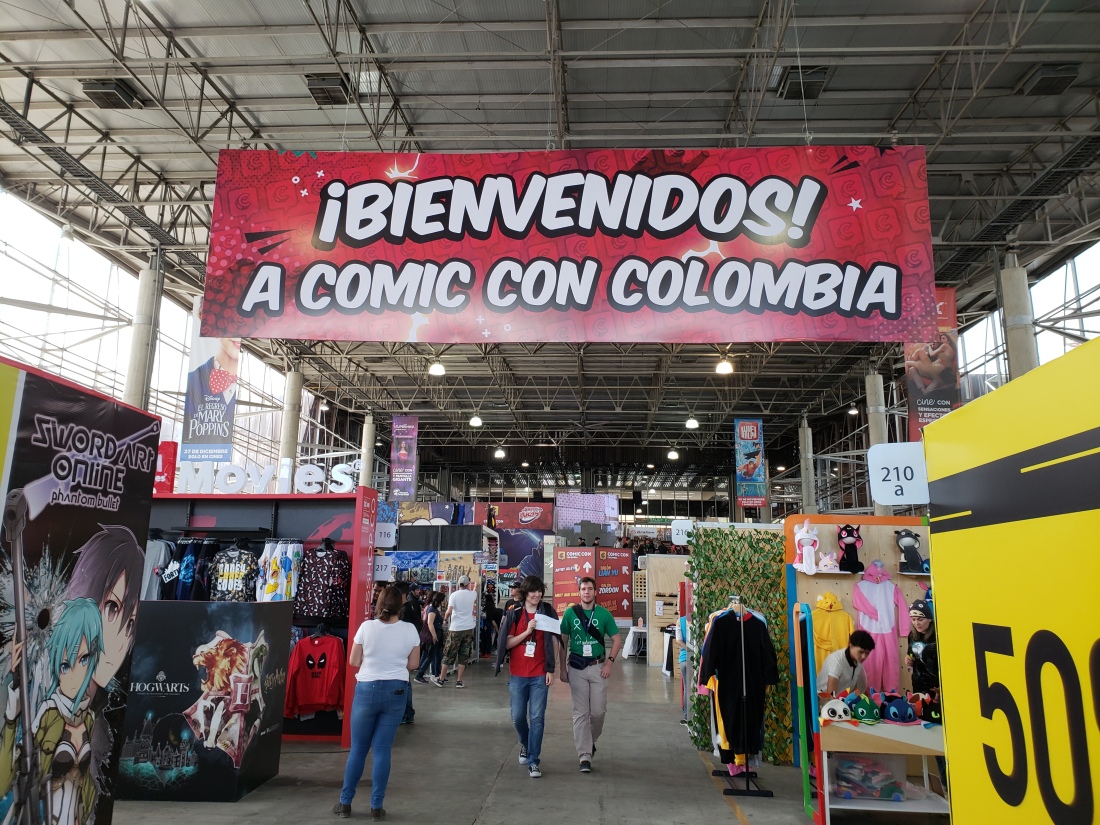 I was able to assist there on its first day, aiming to attend some interesting talks based on their program. Given my previous year’s experiences with the talks I was ready to be disappointed with the organization; unfortunately, it went even worse than expected. One of the issues they had past years was people couldn’t find out where the conference rooms were; well, this year I was hopeful it was going to be better when I saw this sign at the entrance.

Unfortunately, the track ended abruptly ahead in the main pavilion, leaving you clueless as to where the talks took place. After wandering around aimlessly for a bit, I managed to find the rooms in a corridor outside the building, devoid of any indications.

After completing the quest of finding the rooms, I found out the first talk was not going to happen due to the rooms still being set up, and also because (unsurprisingly) only the speaker had managed to arrive (and even he had some difficulties). We were not alone in this, of course, during the day I saw stickers pasted on the program poster, asking for directions.

The second talk was also canceled for similar reasons which discouraged me to try to attend most of the other talks for the day. Almost by the end of the day I attended one about Science Fiction which was ok, and found out the other talk I was interested in was actually a writing workshop, which I was too tired already to take part in.

I discussed this with a friend and we agreed all of this “academic” track of Comic-Con Colombia is something they are keeping just for the “status” of the event, but they don’t put a lot of energies on it since all they care about is fitting more stores to increase their revenue. Not like this hasn’t happened in other comic-cons around the world, but I feel there’s a lot of room for improvement. 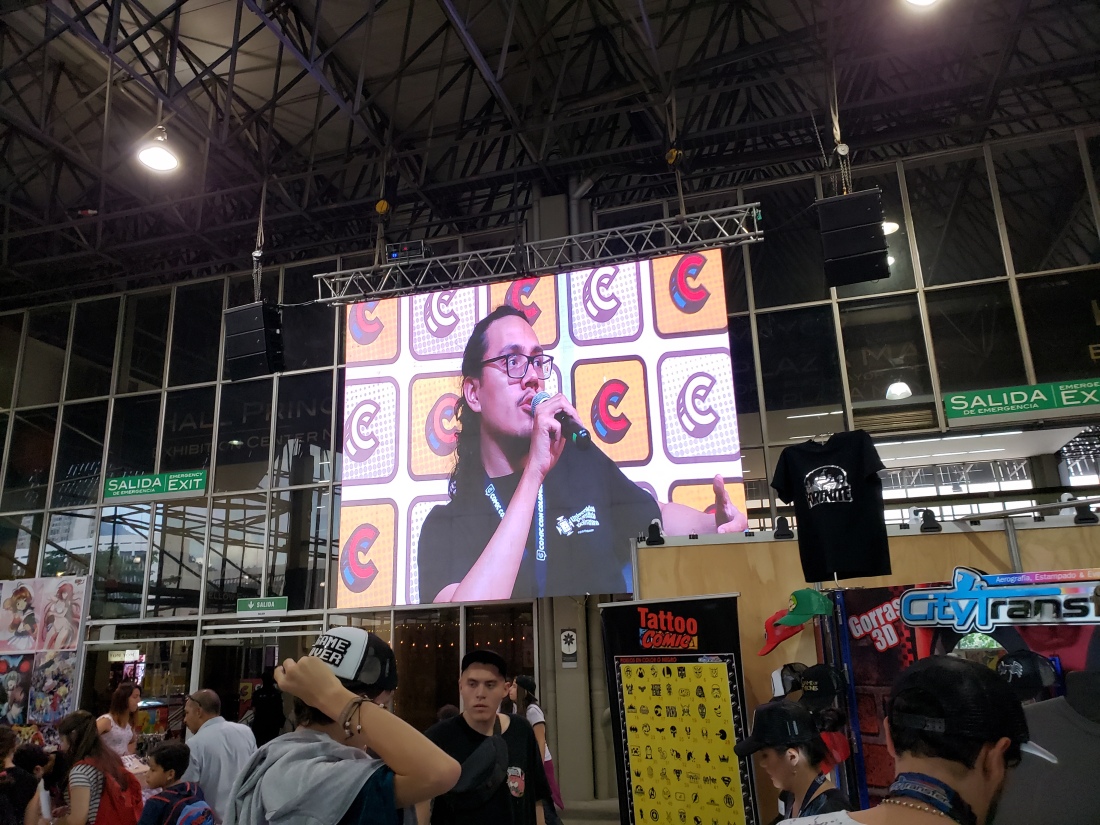 Some interesting discussion took place in the main stage tho; in one of them, Juan Camacho from UPB’s Digital Entertainment program and Andrés Gomez from lafinka.tv, discussed the current status of the animation and video games scene in Colombia. 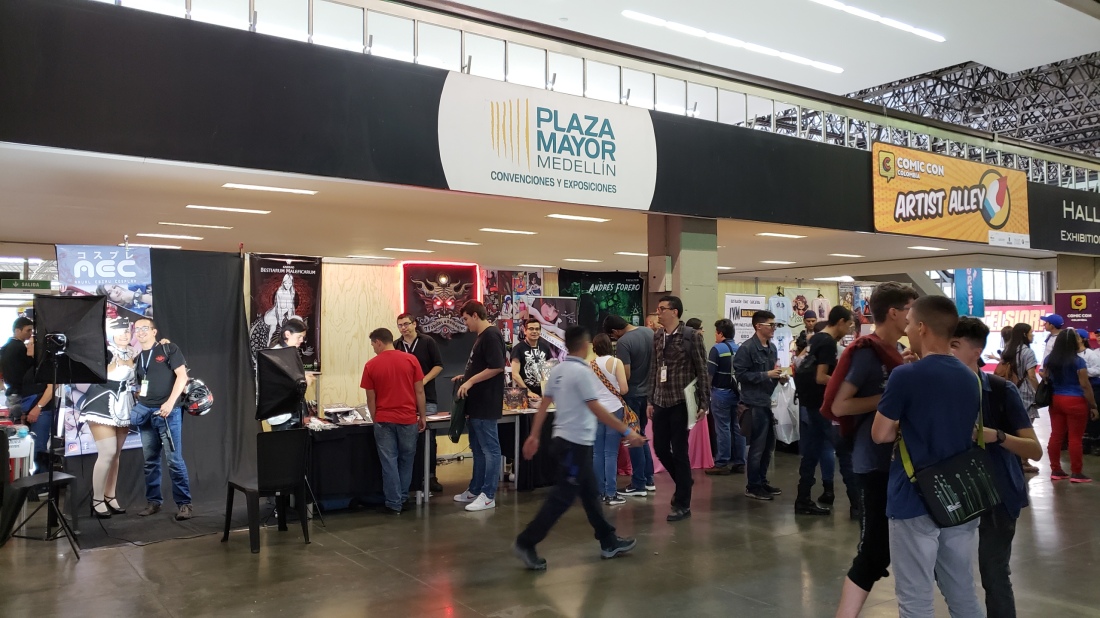 Let’s go into the happier news with the Artists’ Alley which was pretty good this year and seems like the only reason I would attend the event again next year. I was able to see comic artists from Bogotá, Medellín, and Cali, as well as two professional cosplayers and a sculptor. I wish again this particular section was bigger since I believe it’s what makes more sense to check (the work of local artists). But of course, it doesn’t bring enough money. 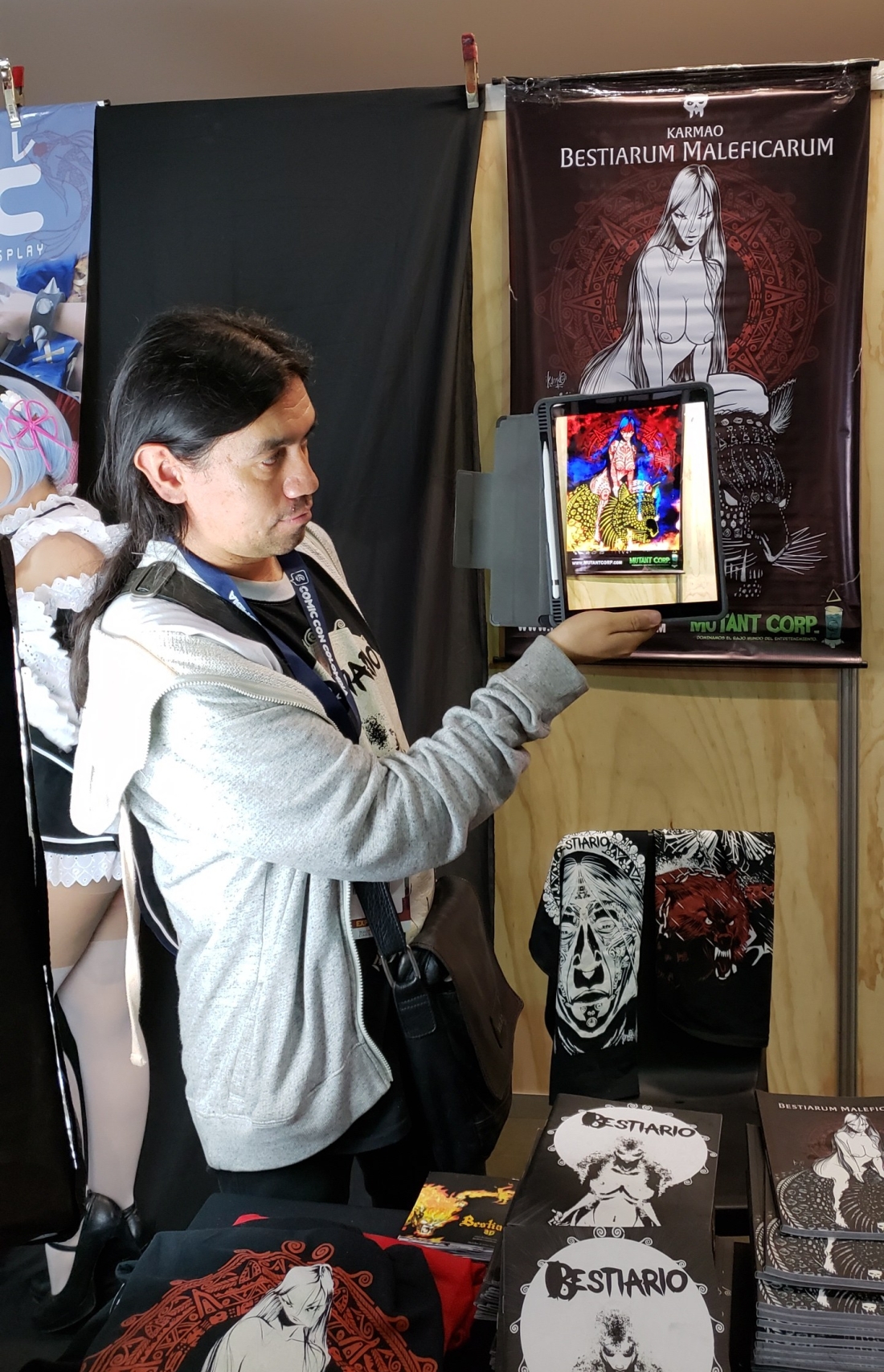 Karmao’s “Bestiarum Maleficarum” is a nice rendition of monsters from Colombian legends, with the added coolness of all of them having Augmented Reality visualizations.

Heroes Latinos by Mikealdi Comics is a saga inspired by Latin American countries.

In “Buziraco”, from Dragón Negro Comics, the city of Cali is attacked by a demon in 1825. Two brothers, Franciscan friars, are tasked with defeating the demon with their holy weapons, but it will not be easy…

“7 Fábulas & Demonios” by Grecox and Santísima Daysi, is the story of how a group of innocent and happy animals becomes demons representing the seven deadly sins, thru the magic of living in “Maldita Fé de Bogotá”. 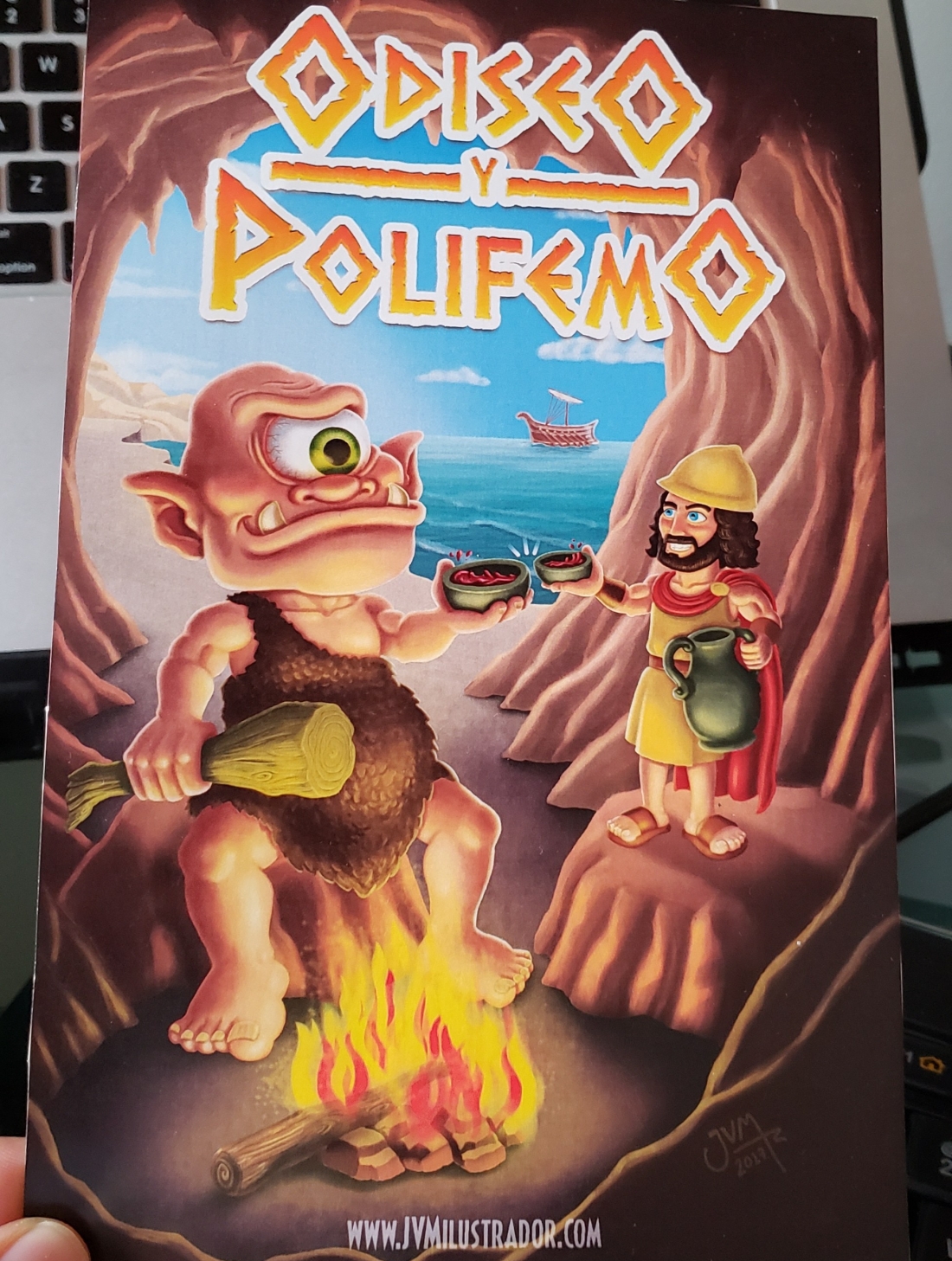 Jonathan Vélez Muriel (JVM Ilustrador) was also in the Alley showcasing his work, including compilations of his InkTober work, and some watercolors and illustrations.

The Zape Pelele guys were also in the event, drawing people and promoting their “New Zape” magazine. 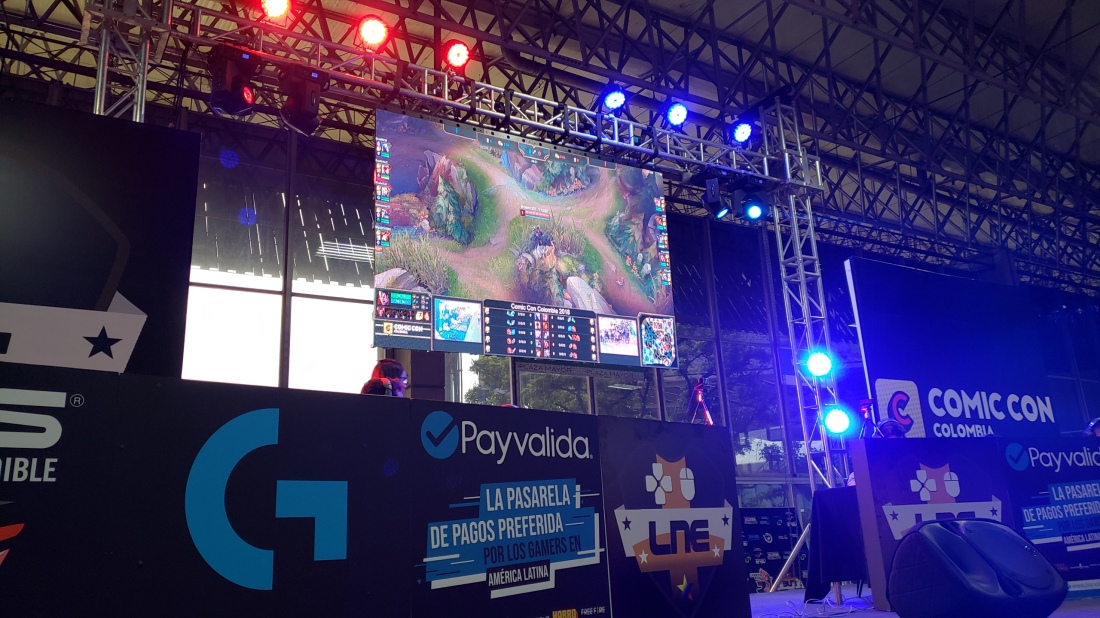 The game area was bigger this year, including areas with different kind of games, organized tournaments, booths for Gaming Hardware companies and spaces where players could experience VR games. It was organized again by Gamers and Geeks and it keeps getting better every year.

UPB also had a booth again, with games made by their students including a bullet hell game I almost won. 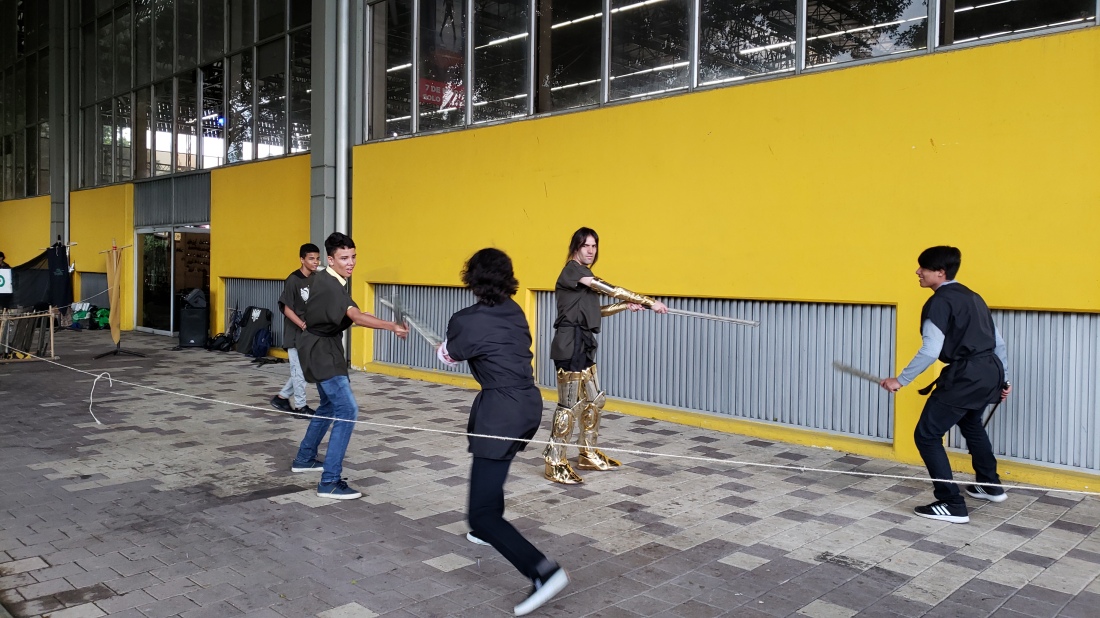 The communities area was pretty sparse this year, I saw an area where the Mil Espadas guys were having a tournament, and they also had an archery range. There was another area for the Tolkien Fans community where you could take pictures with some monsters.

This creative studio is the creator of “Mariposas”, an animated short that received the “City of Annecy Award” in the Festival international du film d’animation d’Annecy. They were displaying their services portfolio, meeting other Colombian companies and having some talks about Mariposas and other topics related to the animation.

Of course, a big chunk of the event was devoted to the stores, including comics and manga, action figures, books, otaku-stuff and clothing.

Some of the interesting things I saw where hand-made rubber guns of different types, I almost bought one.

There were some positives this year, with higher quality for the exhibitors, and the game arena was much better organized from what I could see.

I already discussed the problems with the organization of the talks; they also missed again publishing the event program on the website baring a link on their facebook page that you had to dig really deep to find (and was not completely accurate). I wonder what will happen this year in this regard, will they get better at it or will it be dismissed for good?

Again, I wish the Artist’s Alley area would grow and more welcoming for local artists. Some of the things I also missed this year was a strong presence of special guests (I was there on Friday and I didn’t really hear anything from them) and a much-reduced number of cosplayer walking around.

Even so, the event remains a good chance to meet artists and geek friends, I hope they address the issues and make it better next time. Until next year!