We have been working on the tech demo for about 14 weeks now. Discuss this update or the game in general at the community here.

Implemented a first iteration of volumetric clouds replacing the billboard we were using initially, still gotta work a bit on them to have better cloud models and play around a bit with the settings of the plugin we are using (as well as work some display bugs it has). 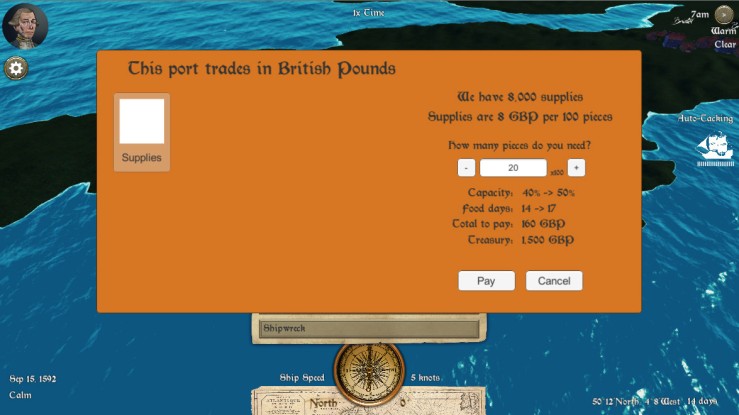 We implemented a first version on the “Buy Goods” flow, simplified to a single type of abstract “supplies”, and still without any UI art. But it allows for a complete mechanic of having to restock your ship to survive.

Future iterations will have different ports use different currencies, requiring you to exchanges your valuables. This will also work as a “bartering” mode for cultures that don’t have a currency, so things will be assigned a temporal “Value” that works as a currency.

As we continued tweaking and fixing minor issues in the world simulation, we looked forward to creating the elements required to have a first complete gameplay loop. We tied the player’s starting position to a city defined in the campaign, made it so that this city’s window opens when you start, and we are now working on the quest system.

We get closer to our goal for the tech demo, once the Quest system is in place we will focus on polishing the UI, adding the “freeform” expedition mode, and doing a basic skinning over the world map adding forest, terrains for deserts and montains and tundras.