We made the ambient light much brighter (also during the night, but blueish) and did some work on the sun and moon’ lights to accommodate better to the scene, along with some tweaks on the terrain’ reflection.

We also made the camera hover much closer to the player, in order to both create a better connection between the player and the characters, and to make exploration more interesting (less world visible at a time)

Implemented a first version of the fatigue system, including modifiers. Environment changes will affect the rate at which your expedition gets tired. The hunger system was also simplified, made a bit more abstract and easier to understand and control.

You can now create a camp for your Expedition to recover the fatigue. It will take some time to create and then you can either rest on it or transform it into a town which you can name. The definitive town creation will likely be a bit different tho. You also now you see a title with the day of the Expedition every new day, which now last 3 minutes.

We did further tests with low poly trees for forests, but definitively the texture alone looks better for now. Also switched the models used for Soldiers and Archers, for lighter equipped versions.

Created a new town, “Nueva Esperanza” located on an island near the mainland. Re-imagined the setting (still in progress) but basically, this island is a safe place where a city was established years ago but the mainland remains unexplored and savage, so your mission is to fix that.

Redesigned the town dialog based on a new model with actions and buildings with people inside, also implemented a new “interaction” dialog, to talk with people in towns and access the stores. 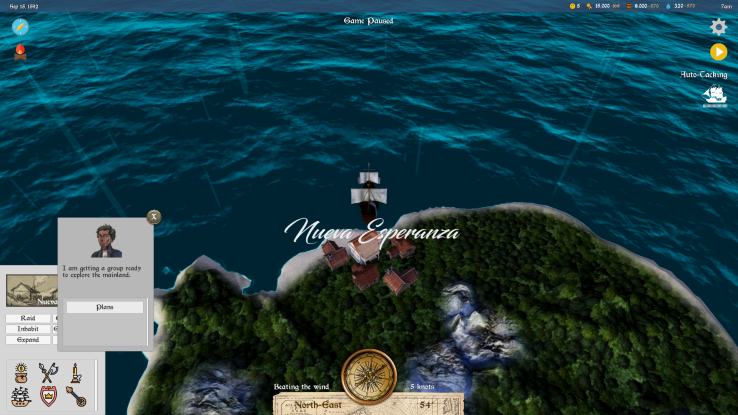