This is the third edition of The Kramora Times, you favorite and more reliable source for all Ananias-related information. You can now subscribe to receive this newsletter in your email too!

It’s been two months since the last release! We are yet one step closer to Steam and iOS. Almost there. Thanks to all the testers who checked the RC versions, it was very helpful!

Plans for the future

I continue getting close to the Steam and iOS release. This is the status of the same items I talked about on Kramora Times # 2

The lack of graphics for the detailed views of all items has prevent me from adding all of them. I have decided I won’t let that stop me, so for the items for which I don’t have a zoomed graphic, I’ll just use the normal “paperdoll” graphic. It may be won’t look very professional at first, but in time I might get the resources to add these missing graphics.

Done! I added the weapons… still wish I had zoomed/detailed graphics for all of them, hope if I’ll be able to get them before the next version?

I have been thinking on adding a bit more to the plot / story. Still haven’t thought on the details. I’ve made up some sparse bits of lore, so may be I can use that as a starting point for the world. As for the player experience inside the game, I may include some recurring characters with semi-random events. Again, still haven’t thought it out.

The game is clearly not meant to be played using the keyboard now. There’s a rudimentary support for movement but it’s pretty slow. Also, there are no keyboard shortcuts neither support for the menus or inventory.

I think I’m done for keyboard, at least for the initial Steam release, the game will be played with keyboard for movement (already works now) and mouse for the menus and targeting.

If I go on to support consoles in the future, I’d had to work further on this so that mouse is not needed at all. No easy task!

Thanks again to Gamers and Geeks, I was able to have a small spot at Comic Con Colombia 2016, along with some other Indie Devs from Medellin! 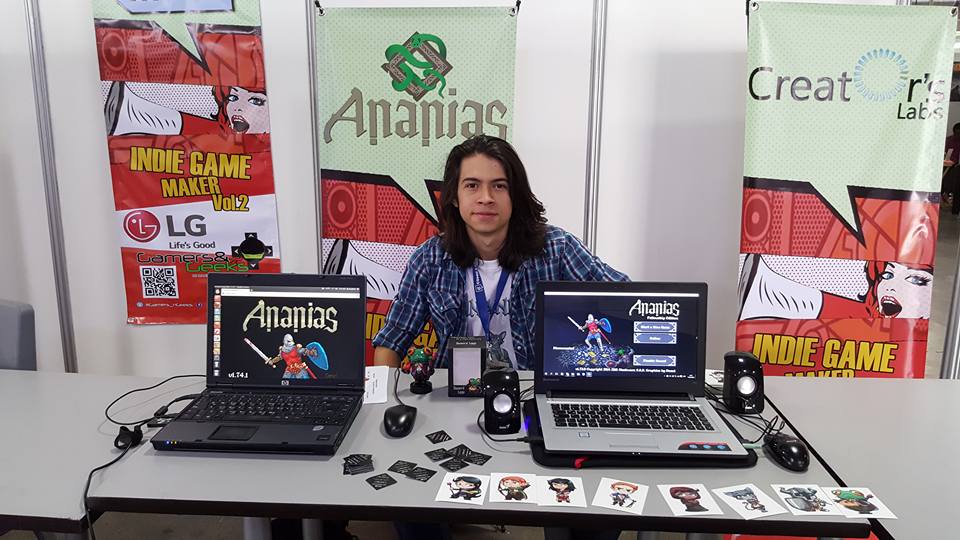 Lots of people got to play the game, and we also had some merchandise (shirts and stickers) which people liked quite a lot. I still gotta put on the official online store on the website.

Still haven’t managed to push forward the development of these. It’s been a busy month! We will have about 4 new pieces available by the end of week. I’ll be doing these by request from the online store, soon!

We had a summer sale over itch.io from June 24 to July 8 with a 50% discount. Thanks to all who contributed, every dollar counts towards finishing the game in an awesome way!

I also updated the itch.io page for Ananias so it looks a bit better now, I think the platform has evolved quite a bit since I first submitted the game there 🙂

Sadly no advancement on this! I discussed some ideas with the artists but have failed to create the script for it so there’s little advancement.